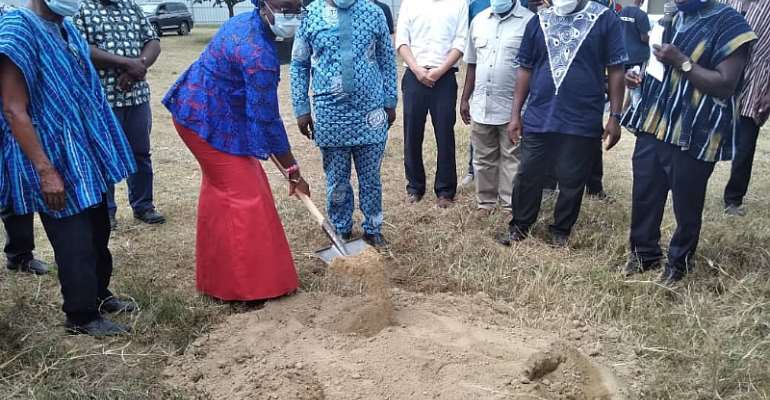 The second term of the ruling NPP government under President Nana Akufo-Addo will see the construction of six new TVET workshop centres across the six new regions.

The regions set to benefit are Bono East, Ahafo, Savanna, North-East, and Western-North.

Gifty Twum Ampofo, Deputy Minister of Education in charge of TVET gave the hint when she cut the sod for the construction of a new TVET Workshop Centre at St Paul’s Technical High School at Akyem – Kukruantumi in the Abuakwa North Constituency of the Eastern Region.

The contractor, Avic International, a Chinese firm, is supposed to complete and hand over the fully furnished workshop in 18 months.

The Deputy Minister who is the Member of Parliament for the area explained that the project was scheduled to start in June but due to coronavirus pandemic they have rescheduled for October ending.

She noted that with the six regions set to get a befitting TVET centre, the other three will take place in the Eastern and Central to complement Phase One, adding that, Technical and Vocational Education and Training is the priority of the government of Nana Akufo-Addo.

Mrs Twum-Ampofo further pointed out that the government has invested much in TVET which is about $1billion.

The Deputy Education Minister narrated that her sector has funding for 32 state of the art TVET centres which can be compared to that of Japan, Singapore and other top countries.

She said, with the 32 state of the art TVET centres, they have grouped them into phases, that is Phase 1, 2 and 3, adding that each Phase is having nine TVET centres with the first 6 going into the new six regions since they lack a proper TVET centre.

According to her, TVET is expensive and need a lot of commitment and passion and that, they are not talking about free TVET as a slogan but making millions of investment in establishing TVET institutions with a state of the art workshops and laboratories to ensure that students who attend TVET school become globally competitive.

She said, since 2017, they have done a lot of investment and advocacy to ensure that the number of students who attend the various TVET institutions being formal, complementary or informal they all receive world standard training.

“From 2017 until now, we’ve trained about 65, 000 learners and all these trainings are free. In fact, TVET schools are expensive as compared to that of the grammar schools. I’m glad to announce that all monies for the practicals for the whole of the four years of the free SHS introduced in 2017, all practicals money were sent on time and during their examination, while we paid GHC15 for grammar schools, we paid GHC35 for technical schools practicals and this shows our commitment to free TVET education” she said.

She said, in the bid to make TVET attractive they have sent Bill to Parliament which is education regulators bill and has expressed that, the bill is completed and functioning, remaining with the pre-tertiary bill.

She lamented that government commitment of TVET is overwhelming and revealed government readiness to continue supporting TVET schools.

She said the government is spending $131 million in NVTI whereas the state of the art $478 million for Phase 1 of the project.

The Chief Of Akyem – Kukruantumi, Osaberima Boama Darko also expressed gratitude to the government for the keen interest taking towards TVET schools.

He then pleaded with the government to attend to the poor road networks in the area.

Attached Images: the minister flanked with contractors cutting the sod for the construction of the TVET workshop centre.