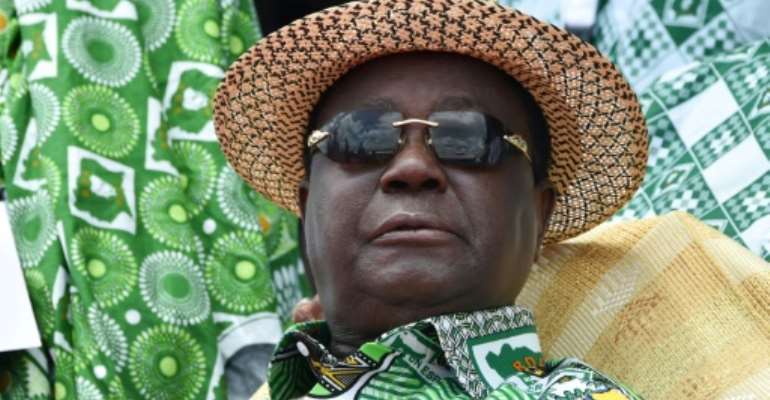 Ivory Coast ex-president Henri Konan Bedie and former rebel leader Guillaume Soro were officially nominated on the weekend as the candidates of their opposition parties for next month's tense presidential election.

The vote in the country with a recent history of post-election violence has turned volatile after President Alassane Ouattara's handpicked successor died unexpectedly, prompting the incumbent to run for a contentious third term.

Former prime minister Soro, who intends to run from exile in France because he faces a long list of legal difficulties at home, was nominated as the candidate of his Generations and People in Solidarity (GPS) party on Sunday.

But the country's electoral commission has barred Soro from running in the October 31 vote as he was sentenced in April to 20 years in prison for "concealment of embezzlement of public funds".

GPS formally nominated Soro at a gathering of hundreds of supporters at a hotel in Abidjan.

"Our candidate is eligible for the next presidential election and he will win it," said party spokeswoman Minata Kone Zie.

"Let us unite our energies and our actions to impose a democratic alternative."

The country's main opposition party, PDCI, meanwhile nominated the 86-year-old Bedie as its candidate on Saturday.

In front of tens of thousands of supporters in the capital Yamoussoukro, Bedie called for opposition parties to unite behind him.

"I invite all political formations and political platforms, that want to, to support my candidacy," he said.

He pledged his government would take "concrete and immediate measures for the unconditional return of all exiles, as well as the release of all political, civilian and military prisoners from the post-election crisis".

Laurent Gbagbo was then elected president in 2000, but when Gbagbo refused to recognise Ouattara's 2010 election victory, months of violence followed in which around 3,000 people lost their lives.

Gbagbo's supporters have filed for him to run in next month's election.

But he is also living in exile, sentenced in absentia to a 20-year term last year over the looting of the local branch of the Central Bank of West African States during the post-election crisis.

Soro's lawyers filed several requests to Ivory Coast's constitutional council over the past week to try to allow him in stand in the election.

Former rebel leader Guillaume Soro intends to run from exile in France as he faces a long list of legal difficulties at home. By Lionel BONAVENTURE (AFP/File)

But the electoral commission has said that anyone convicted of a crime cannot contest, and judicial sources have told AFP that Soro or Gbagbo are unlikely to be allowed to run.

The constitutional council is expected to release the list of validated candidates this week.

Unrest and uncertainty ahead of October's election has sparked fears that political violence could again return to the country.

Ouattara's announcement last month that he would run for a third term provoked protests that degenerated into violence, leaving around 15 dead.

The president had previously committed to not running again, but he changed his mind after the sudden death of prime minister Amadou Gon Coulibaly from a heart attack in July.

Bedie called Ouattara's tilt at a third term a "violation" of the constitution.