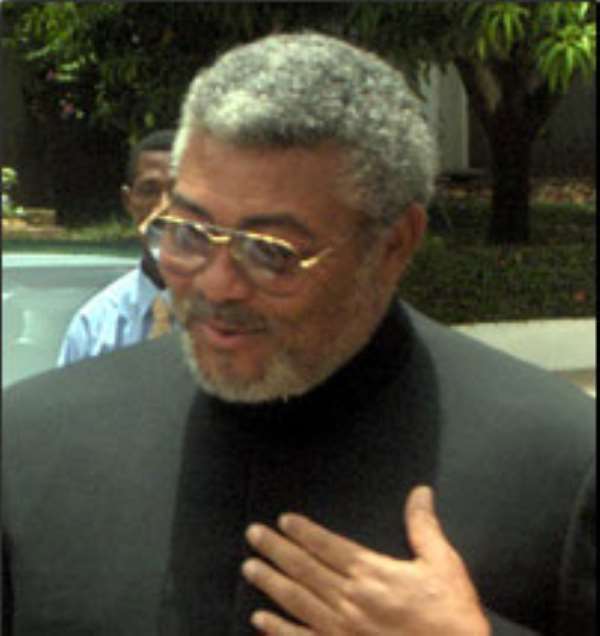 The special aide to former President John Rawlings has dismissed reports that the ex-head-of-state has been summoned by a United States court to respond to questions concerning the execution of General Ignatius Kutu-Acheampong.

Victor Smith told a local radio station - Joy FM - that the report is a vindictive ploy by the ruling NPP government to discredit the former President.

The Daily Guide newspaper reports (see below) in its Monday edition that a United States court in Chicago has asked Mr. Rawlings to appear before it on October 16, failing which he faces charges of contempt.

According to the newspaper, the court subpoena was served on the Ghana Embassy in Washington D.C. for onward transmission to the former President. The newspaper speculated that the US court order, if true, could trigger ''the opening of a Pandora box over his [Rawlings'] abysmal human rights records relating to the period of his two military regimes''.

But the former President's special aide said Mr. Rawlings has not received any summons. Mr. Smith said Mr Rawlings clashed with one Victoria, a daughter of Kutu-Acheampong. Kutu-Acheampong was one of former military leaders executed in 1979 by the Rawling-led Armed Forces Revolutionary Council (AFRC).

Mr. Rawlings was a key speaker at the Christ Oasis Church in Chicago which marked the end of the Ghanafest 2006 festival organized by the Ghanaian community in Chicago.
VICTORIA IS NO RELATION OF Mr. KUTU ACHEAMPONG
(Ebby Komey) Sources within the Chicago Police and the Cook County Recorder of Deeds office reveal that VICTORIA BOATENG aka Acheampong, is now in the grips of the law. Victoria was said to be left with no other choice than to report herself to the police, after a large police contingent had gone to her last known address to arrest her for assaulting Mr Ruben Hadidze, Chairman of the Chicago National Council of Ghanaian Association during a thanksgiving Church Service to commemorate the success of the 2006 Ghana Cultural Festival in Chicago.

The show of force by the police, alarmed Victoria's mother, Grace Frimpong, who then enlisted the help of one Nana Amofa, to intercede on her daughter's behalf, for the complainant to drop the case. Victoria was promptly taken into custody when the police handcuffed her on sight and fingerprinted her when she reported to the police. By then the police had discovered that Victoria's official name is Victoria Boateng! Her biological father is one ALBERT BOATENG based in Florida, USA. This explained the mystery of the official name “Victoria Boateng” she goes by.

One Mr Karikari said to be related to the former head of state, Mr Kutu Acheampong, denied that her late brother is the father of Victoria Acheampong. Victoria does not use the name Acheampong on any of her official transactions but within the Ghanaian Community she styles herself wrongly as the daughter of the late Kutu Acheampong and has gotten the Ghanaian Community to recognize her as Victoria Acheampong. Victoria has since then been bailed by her mother Grace Frimpong, and the white man who claimed to be from Switzerland and was with Victoria on the day she assaulted the chairman of the National Council has vanished into thin air and cannot be found to be charged as an accomplice. Victoria Boateng has since been processed by the police and is due in Court on October 16th 2006.
US Court Chases Rawlings
Flt. Lt. Jerry John Rawlings, Ghana's former head of state has been ordered by a US court sitting in Chicago to make an appearance to answer questions concerning the execution or killing of General Ignatius Kutu Acheampong, former Head of State. The subpoena summons is asking Mr Rawlings to appear before the court on October 16, 2006 in Chicago.

Mr Rawlings who was chairman of the Armed Forces Revolutionary Council (AFRC) when General Acheampong was executed at the Teshie Firing Range in the 1979 uprising, is in addition being asked by the Chicago court to come along with documentary evidence in the form of video tapes, pictures and other materials concerning the execution of the former head of state and chairman of the National Redemption council (NRC).

Mr. Rawlings who had a brush with the daughter of General Acheampong during his recent trip to Chicago, D. Guide learnt is to appear before the court on the date or face charges of contempt which would precipitate other sanctions.

According to sources close to the children of Gen. Acheampong in London and the USA, the court subpoena has been served on the Ghana embassy in Washington DC, for onward transmission to the former President here in Ghana.

D. Guide cannot confirm whether the former President has received the subpoena summons or not. The US court order on Mr. Rawlings may probably trigger the opening of a Pandora box over his abysmal human rights records relating to the periods of his two military regimes, with far-reaching implications concerning or from other aggrieved individuals who have been yearning to drag the former president to court over his human rights abuses.

Legal analysts contacted by D. Guide last night, were of the opinion that Mr Rawlings had no choice but to honour the court order, otherwise he stood the risk of being arrest if he entered US territory.

Other legal opinions suggested that the National Democratic Congress (NDC) founder may be extradited to the US to answer charges on the killing of General Acheampong, if he traveled to a country with an extradition treaty with the US.