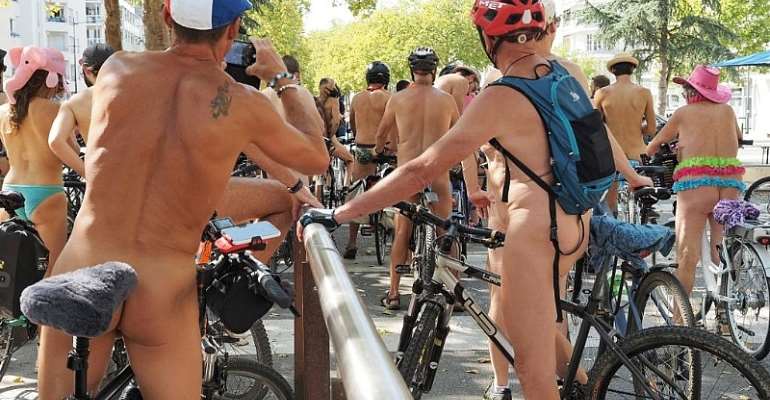 After years of trying, the first World Naked Bike Ride has been held in France, in the town of Rennes in Brittany. But similar events in Paris and Lyon were banned at the last minute.

The World Naked Bike Ride (WNBR) or Cyclonudista as it's affectionately known, is popular in Belgium, Spain, Germany and the U.S.

And while France has one of Europe's strongest naturist movements, the rally has never been allowed here.

On Saturday, the town of Rennes in northwest France turned the page and allowed cyclists, some wearing just a watch or a hat, to complete a 15 km circuit through its streets and parks.

The Prefect modified the route slightly to avoid the city centre, but otherwise 70 people pedalled as planned.

“We're delighted, we laughed a lot, had a great time,” said Michèle Charles-Dominé, from the French Naturist Federation (FFN) which organised the event.

70 participants isn't huge but “not bad for a first edition she said. "We're hoping the event will develop and spread to other towns."

The cyclists are out to enjoy themselves. But also have a more serious message.

The Naked Bike Ride has green roots and was set up in 2003 to raise awareness about climate change and the fragility of our planet. Eco-friendly transport such is cycling is preferable to fuel-guzzling vehicles.

“Less gas, more ass,” is a popular slogan on rallies in the U.S.

“We only have one planet, so we want to defend it,” said Charles-Dominé.  “When you care about nature, it's better to be naked, you show your fragility.”

Cyclonudista also highlights “the vulnerability of cyclists on the road; we need more bike lanes”.

Banned in Paris and Lyon

The FFN had planned similar events in Paris and Lyon but they were banned at the last minute.

The fully-dressed Tour de France which went through Lyon this weekend may partly explain that city's U-turn.

But for Julien Claudé-Pénégry of FFN's Paris branch, the decision to stop the Paris event is not just disappointing, it's incomprehensible.

“We asked for authorisation back in July and everything seemed fine. Then just this weekend we were told it couldn't go ahead.”

He believes the timing was tactical on the part of the Paris police chief Didier Lallement.

“Didier Lallement is simply playing for time. He waited until the last minute so we wouldn't be able to contest the decision.”

The Prefect's decision was based on Article 222-32 of France's penal code which stipulates that “deliberate sexual display in the sight of others in a place accessible to the public gaze is punishable by one year in prison and a fine”.

Riding a bike naked through the streets could be deemed exhibitionism and therefore to fall under that article. But Claudé-Pénégry roundly denies that.

“Being naked is not in itself a sexual act, there is no exhibitionism. Nudity for us is a way of making people appreciate the fragility of humankind and of the planet.”

He said the FFN has begun court proceedings to contest the Prefect's decision.

Tunisians in largest rally against president's 'coup'
2 minutes ago