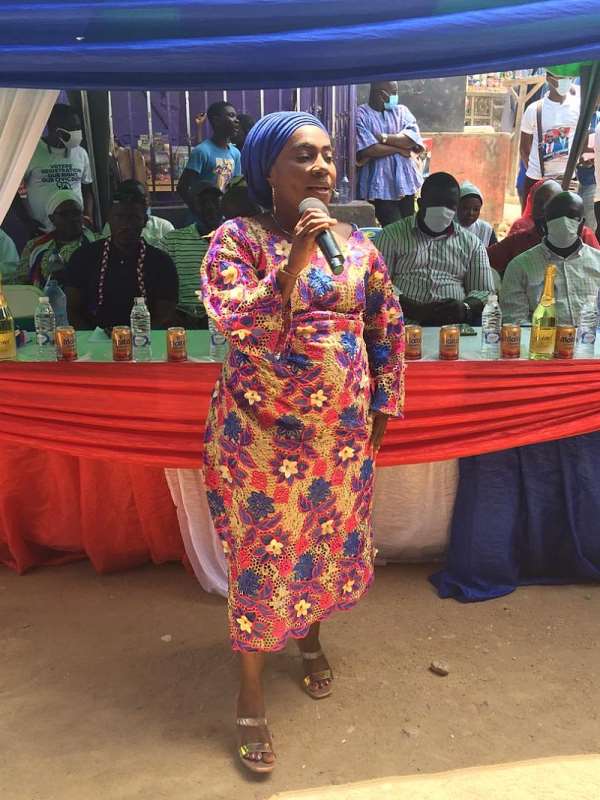 The Central Regional Assistant Secretary of the ruling New Patriotic Party (NPP), Madam Sarah Afful on Saturday inaugurated Cape Coast South Constituency branch of Zongo Ladies for NPP with a call on them to ensure total victory for the party in the upcoming December General Elections

Members of the Association were made up of Youth drawn from the four Moslem Communities in the Cape Coast Metropolis.

Addressing the Ladies soon after the inauguration, Madam Sarah Afful who is also the Central Regional Director of the Youth Employment Agency (YEA) Urged the members to work harder to ensure victory for the NPP Parliamentary Candidate for Cape Coast South Constituency, Mr. Ernest Arthur

Am donating Ghc 300 to support your activities. My doors are opened to collaborate with the members of the Association to achieve its aims and aspirations"

The NPP Parliamentary Candidate for Cape Coast South Constituency, Mr Ernest Arthur who double as the Mayor of Cape Coast Metropolis enumerated a number of projects executed by His Excellency Nana Addo Dankwa Akufo Addo led NPP Government to improve the socio-economic lives of the people in the Metropolis

He mentioned some of the projects as asphalting of the Cape Coast town roads, increase in beneficiary Schools under the School Feeding Programme from 14 to 67 , renovation of jubilee school among others.

" It is never true that the NDC paid for the projects as being rumoured. Nobody left a dine before handing over power in 2017

Such comments needs to be treated with contempt it deserves" Mr. Ernest Arthur debunked rumour

He appealed to every member of the NPP to embark on house to house campaign while observing the Covid-19 safety protocols. He later donated Ghc 1,800 to the Association

The Cape Coast South Constituency Women's Organizer, Madam Caroline Ewusi on her part noted that the introduction of the Free SHS policy had helped Ghanaians who hitherto were unable to send their children to SHS due to financial constraints to do so without difficulty

"Our government has performed creditably, go out there to trumpet this brilliant performance"

Present were the Central Regional Nasara Coordinator, Alhaji Buba and a host of Cape Coast South constituency executives of the NPP