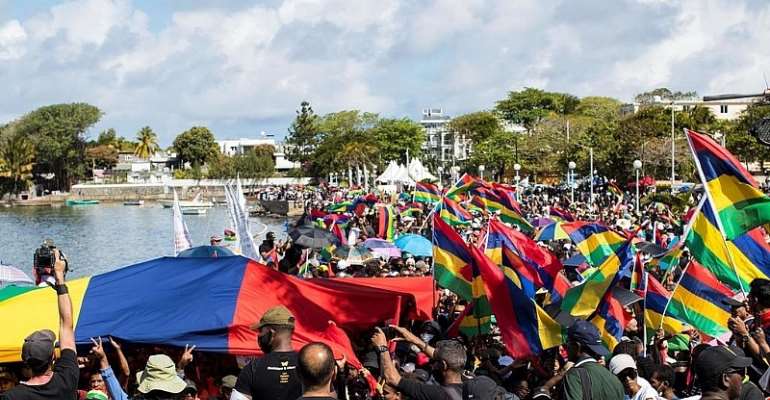 Mauritians have taken to the streets for a second rally after the Wakashio oil spill, calling for a “new Mauritius”. Thousands travelled to the remote south eastern coastal village of Mahebourg on Saturday, in a day of activism, music, food and art.

“I am overwhelmed by what I witnessed on Saturday. Such a large crowd from all parts of the island. young and old, rich and poor, from all religions and backgrounds. They all wanted to be here in Mahebourg,” says Yolande Hennequin from the citizen group, Lasanble Solider Mahebourg–Sid Es, one of the two organisers.

The march is a follow up to the one that took place on 29 August in the capital Port-Louis, where the population demanded the prime minister and his government step down.

This time the citizens responded to a call for a “Nouvo Moris” – creole for a “new Mauritius”.

“The system has failed us. We need deep structural changes if we want things to get better,” says Dany Montille from the citizen platform Konversasion Solider, the other organiser of the march.

“We need to break away from the old mould. We need a new electoral system, a new outlook on social welfare, a new type of governance based on increased solidarity.”

For Hennequin, a marine guide and 41-year old mother of seven, the rights of nature must be enshrined in the constitution so that “the stupidity which led to the Wakashio oil spill never happens again”.

She lives in Blue Bay on the south-east coast, a region directly affected by the 6 August oil spill, which has been described as an ecological crime. She says the women there were horrified by the environmental legacy they would leave for their children.

“But horror very quickly gave place to revolt and they vowed to be more pro-active, even if it meant taking to the streets every week until things finally change for the better,” Hennequin tells RFI.

The sentiment is echoed by 24-year-old Shani, who owns a new recycling company in Flacq, on the east coast. He attended both marches, though he admits never having taking part in demonstrations before.

“I was not much interested in politics until I saw how the ruling party won the last elections in November 2019. Then a series of repressive laws were passed during the Covid-19 lockdown. Afterwards we learned that Mauritius is on a European Union blacklist.

“The Wakashio oil spill and its dismal mismanagement is the last straw to test our resilience,” says Shani. “Enough is enough. The people in this government just want to make more money for themselves and leave nothing for the people.”

Prime Minister Pravind Jugnauth does not understand what the population wants, he says. “We would have liked the PM to apologise at least once.”

Romain, a 26-year-old professional diver, also went to both protests. He too had never been to a demonstration before. But he is fed up with 52 years of the same system since independence. A system which, he says, breeds cronyism and corruption and has enabled the same families to rule the country.

“I am extremely angry. My future looks so dark,” he tells RFI. “I came back home three years ago to build a life here. But now it seems that all my plans are crumbling away.”

Despair on the coast

In Mahebourg, the march organisers proposed a series of broad-ranging demands, including some new ones outlining various support schemes for the people living or working on the south-east coast.

Jason is a 30-year-old fisherman who lives in Cité La Chaux in Mahebourg. He has lost his livelihood as the government had to ban fishing for at least six months because of oil contamination.

Married with two young children, his wife works as a house cleaner. But she cannot find work because of the Covid-19 pandemic and the absence of tourists.

“I have no idea what to do. We have no savings. There is no work even though I am actively looking for a job every day. Fishing is the only thing I know, the only thing I've ever done since I left school at 15,” he tells RFI.

And as Jason is not a licenced fisherman, he is not eligible for the 10,200 rupee (217 euros) monthly aid given by the Mauritian government.

“I went to both protest marches because I need help,” he says.

Hennequin explains that people in this region have managed to survive thanks to a barter system.

“They can no longer rely on the sea to feed them. When people living on the coast had no food, they used to go out get a couple of fish or collect clams like tec tec for a quick curry,” she says.

The Mahebourg demonstrations included concerts and areas with free canvases or plywoods where ordinary citizens expressed their views in drawings or writings. These will be left on the Mahebourg waterfront as an exhibition.

“We firmly believe that activism can also be expressed through art,” Montille, a 45-year-old schoolteacher tells RFI. “Some people brought ravanes [local percussion] and other instruments for impromptu jam sessions.”

It took no convincing to get local musicians to join the free concert, with over 14 artists performing.

“Some of them were already with us helping out with the hand-made floating booms on the Mahebourg waterfront from 6 August onwards,” says Montille.

Zulu is one of the musicians. He comes from a family of fishermen from Pointe d'Esny, where the Wakashio ran aground on 25 July.

“It was important for me to take part in this concert. I do not have enough words to say thank you to all my fellow Mauritians who spontaneously came to Mahebourg to help us when the oil spill started,” he says.

“My music is all I have to share with them. The concert on Saturday was just...wow.”

Mahebourg, a world of its own

Montille said that he did not expect such a large turn out – around 50,000 people, according to police – since Mahebourg is far from the main urban centres on the north-eastern side of the island.

“If so many people came on Saturday, it shows how attached they are to this old, historical village, which was the first port of Mauritius.”

Mahebourg was the capital of Mauritius before Port-Louis.

For Zulu, the village and its region are like the indomitable Gallic village of French comic characters, Asterix and Obelix. This region is set apart from the rest of the island with a heightened sense of solidarity.

Hennequin was moved to meet a 74-year-old man who insisted on walking over two kilometres from the start of the march at Beau-Vallon up to the waterfront in Mahebourg.

“I was moved to find that the Mauritius I love so dearly, and which I feared was lost, is still alive and thriving,” she says. “And I am proud to see that we are not a passive lot.”