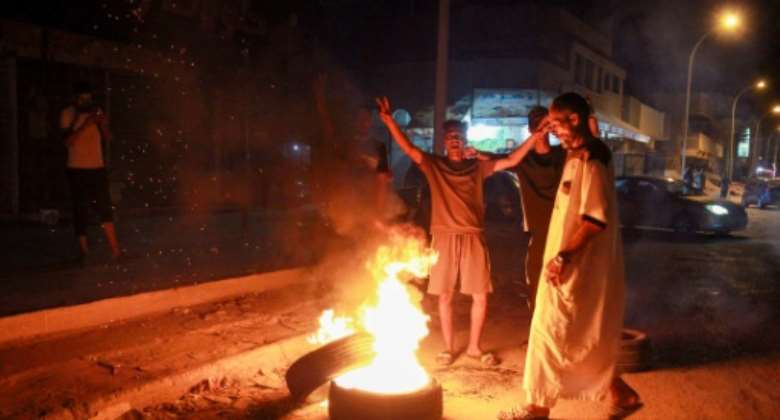 Libyan youth block a road with burning tyres in the eastern city of Benghazi to protest against poor public services and living conditions. By Abdullah DOMA (AFP)

"In the early hours of Sunday, a group of demonstrators attacked the cabinet building," an official from the interior ministry in the eastern government told AFP, speaking on condition of anonymity.

"They set it on fire before fleeing," the source said.

Police and firefighters quickly arrived, but the fire destroyed the main entrance to the building.

Protests also erupted in the eastern town of Al-Marj.

Police opened fire after demonstrators forced their way into the police station.

At least five people were injured, according to witnesses and the hospital.

Recent protests in Libya have been mainly in the western region in the capital Tripoli, seat of the UN-recognised Government of National Accord (GNA), a rival power-base to Haftar.

However, protests began late Thursday in Benghazi in the east, as anger boiled at regular power cuts, cash shortages and high fuel prices.

The eastern administration warned protesters "not to exceed their right to demonstrate and express themselves".

The main military fault line in the North African nation is between forces loyal to the GNA and those backing Haftar, who launched an offensive to seize Tripoli last year.

Haftar was beaten back earlier this year by Turkish-backed GNA forces.

Libya, which sits on the continent's biggest crude oil reserves, has endured almost a decade of violent chaos since the 2011 NATO-backed uprising that toppled and killed dictator Moamer Kadhafi.

Since January, pro-Haftar groups have blocked the country's most important oil fields to demand what they call a fair share of oil revenues.

The blockade -- which has caused more than $9.6 billion in lost revenue, according to National Oil Corporation -- has exacerbated electricity and fuel shortages.