You Are Free To Publish But Cross-check; Don't Lie---NMC To Journalists 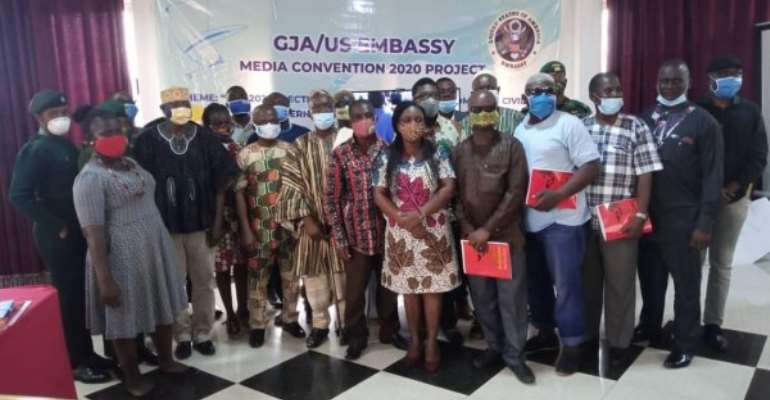 Journalists have been challenged to stick to the ethics and standards of basic fact-checking in journalism to avoid the temptation of publishing fake news or lies.

As Ghanaians go to the polls on December 7th a great deal of responsibility lies on journalists to exercise professionalism to avoid anarchy.

According to Mr. Yaw Boadu-Ayeboafoh, the Chairman of the National Media Commission (NMC) who made these remarks, journalists are free to publish whatever they want to but should not engage in lies.

He said it was also important for journalists to understand that it was not every truth that must be told, especially if the truth had the potential of breaching peaceful coexistence and causing harm.

Mr Boadu-Ayeboafoh said this during the Ghana Journalists Association (GJA)/USA Embassy Media Convention on Election 2020 in Wa on the theme: “The 2020 Election: Role of the Media in Promoting Civility and Discernment in the Political Discourse”.

The Media Convention on Election 2020 brought together media professionals, political parties, Electoral Commission, National Peace Council and the security agencies to deliberate on matters concerning the principal role of the media in the conduct of free and fair elections in Ghana.

Participants were from the Upper West, Savannah and Bono East Regions.

He noted that in political communication, language was very important since one error could create problems leading to unimaginable damage to lives and property, hence, the need for journalists to guard against replicating bad statements made by politicians.

“If you go out there and people are speaking in a language that is not descent, you have an obligation to reduce devoid of the poison to help build a better society for ourselves. It is a responsibility that we must bear”, the NMC Chairman noted.

Mr Boadu-Ayeboafoh reminded journalists that reporting on elections demanded commitment and understanding of the issues, the concepts, the principles, processes, expectations, emotions and anxieties for effective communication.

He urged journalists to be aware of the sources of electoral information, electoral experts, the philosophy of political parties and the legal framework among others to aid in effective public education and avoidance of very serious errors.

He said the expectation from the media in covering elections would serve as the voice and guardian of voters for them to make informed choices.

Mr Boadu-Ayeboafoh also reminded the media of its obligation to promote good faith towards the political parties, the candidates, the electoral processes and in general help strengthen democracy.

Mrs. Linda Asante-Agyei, Vice President of GJA said the objective of the Media Convention was to bring together key stakeholders including the Electoral Commission (EC), the NMC, the National Communication Authority, the media owners, civil society groups and security agencies to assist the media to inform, educate the electorate, promote free and fair elections and champion the course of civility, dialogue, decorum and discernment in the political discourse.

Mrs. Asante-Agyei noted that the media convention focused on issues such as the 'GJA Guidelines on Electoral Reporting: Its impact, challenges and review'; 'NMC media monitoring and complaint settlement, how effective as regulatory tools', how can election 2020 coverage be insulated', and 'attacks on media during elections: causes and effects'.

Mr Osman Ali, the Upper West Regional Director of the EC, noted that the Commission expected the media to educate voters on how to exercise their democratic rights, reporting accurately on the developments of the 2020 election campaign and provide the platform for political parties and candidates, to communicate their message to the electorates among other expectations.

Rev. Dr Aloysius Nuolabong, the Chairman of the Upper West Regional Peace Council appealed to the EC, security agencies, the political parties and the media to play their respective roles effectively to bring about peace in the December 7 elections.

Takoradi 'azaaa' woman still in custody as she fails to meet...
1 hour ago