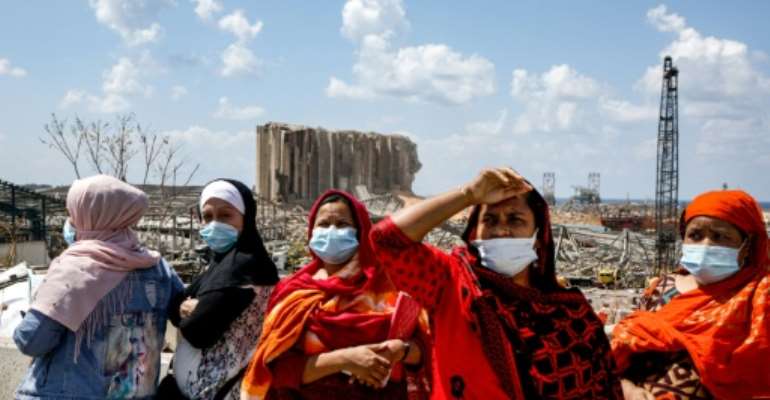 Lebanese women (L) and South Asian foreign workers (R) look on as they stand before the ravaged port of Lebanon's capital Beirut on August 9. By PATRICK BAZ (AFP)

Lebanon has approved a new work contract allowing foreign domestic workers to resign and keep hold of their own passport, but activists say the exploitative "kafala" system remains in place.

The economic crisis-hit Mediterranean country is home to around 250,000 migrants, mostly women from Africa and Asia, who toil away in people's homes as housekeepers, carers or nannies.

They are not protected by the country's labour law, but instead work under a set of laws, policies and customs called kafala repeatedly slammed by rights groups as allowing a wide range of abuse.

Under kafala, meaning "sponsorship" in Arabic, the employer sponsors the worker's legal immigration status in the country, and the latter cannot resign without their consent or they become undocumented. The law also does not ban withholding a worker's passport.

All this leaves a worker at the employer's mercy.

Lebanon's economic and coronavirus crises have increased the urgency for reform over the past year, with many families now paying their workers in the devaluated local currency, and some not at all.

In recent months, dozens of foreign helpers have been thrown out into the streets without due pay or even their passport, many of them interviewed by AFP. 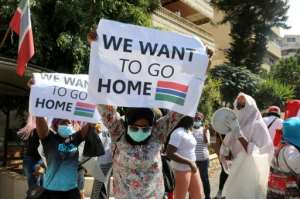 Gambian workers in Lebanon protest at their consulate pleading to be taken home. By ANWAR AMRO (AFP)

After the August 4 blast at Beirut port that devastated swathes of the capital and killed more than 190 people, foreign workers have staged rallies outside their consulates appealing to be sent home.

The labour ministry finally this month published a new and revised work contract for domestic workers, the main legal document governing their stay in Lebanon.

Campaigners have welcomed the detailed five-page document outlining workers' rights, but say it is only a beginning.

"It is no doubt a much better version than the older one," said Amnesty International researcher Diala Haidar. But "a contract alone doesn't end kafala."

Most importantly, the new contract gives the workers the right to resign and change employers, and says they can keep their passport.

If their employer withholds their wages or passport, they can immediately quit without notice. 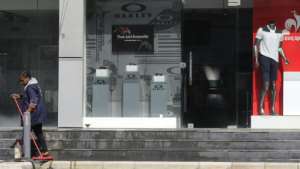 A domestic worker cleaning the stairs of a shop in the area of Jounieh north of thew Lebanese capital. By JOSEPH EID (AFP/File)

It finally gives the worker the right to the national minimum wage of 675,000 pounds ($450 before the crisis, less than $100 at the black market rate) -- albeit allowing the substraction of an undetermined amount to cover food, board and clothes.

The new contract states workers must be provided with a private, well-ventilated room with a key, an improvement after many women said they were forced to sleep in the living room or on a balcony.

It limits labour to eight hours a day in a six-day week, and details the right to daily rest, paid holidays and sick leave.

But activists warn that all these new provisions will amount to nothing without inspections and unless employers violating the agreement are held accountable.

"In the absence of an enforcement mechanism, this contract will remain ink on paper," Haidar said.

The old contract, for example, states the worker must receive their wages at the end of the month, but this had not stopped some from kicking out workers without pay.

"We haven't seen any employers held to account for this breach of the contract," she said.

A Beirut housewife, who employs a Filipina domestic worker, insisted there are two sides to the story.

"The employer needs to keep at least one document as security... I know some employers are bad but also some employees are ungrateful," the 59-year-old said, asking not to be named.

Rights groups have documented manifold abuses over the years, including no day off, locking workers inside the house, and physical or sexual assault.

Activists have reported up to two deaths a week.

They have repeatedly called for an end to kafala, which is common in the Middle East and often compared to modern-day slavery.

Zeina Mezher of the International Labour Organization (ILO) called the new contract "one step in the right direction" towards dismantling kafala.

But it's just "the first step on a road that is still complicated", she said.

She said support was needed to ensure a worker could resign without losing their residency permit.

Activists have also called for parliament to amend the labour law to bring all domestic workers -- Lebanese and foreign -- under its protection, and give them the right to set up unions.