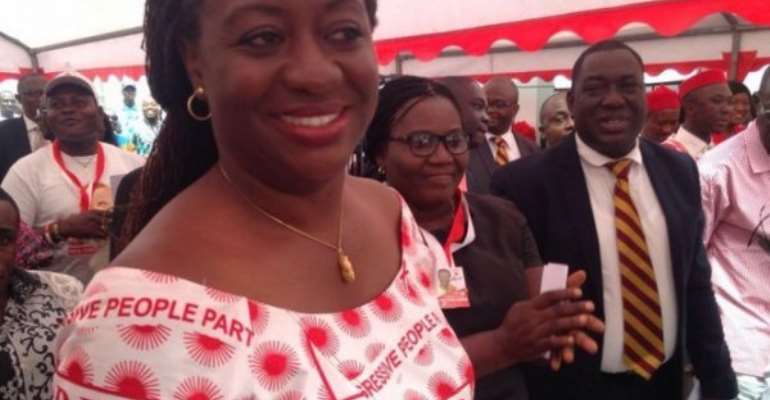 The sort of politics being done in Ghana requires a great deal of new face of political leadership to restore integrity, dignity, and sanity in the system.

It is against this background that Ms. Bridget Dzogbenuku, flagbearer, Progressive People's Party (PPP), for the 2020 elections has promised a new leadership with “bold ideas and actions” to transform Ghana

She also pledged to restore good values, discipline and patriotism in the country when voted into power.

Ms Dzogbenuku made the pledge when she was outdoored as the Flagbearer of the PPP in Accra on Saturday.

She said, “We have been promised a better Ghana and real change over the years but all we have seen is two sizes of the same coin with widening gap between the rich and poor.“

For the nation to progress, she appealed to the electorate to vote for the PPP to implement its innovative ideas to develop the country.

The PPP Flagbearer promised to lead an incorruptible government, ensure a Free Compulsory Basic Education, peace and security, growth at all levels as well as, inclusive leadership.

She advised the public to be wary of political parties promising freebies because they were unsustainable and dis-empowering.

Ms. Dzogbenuku was the running mate of Papa Kwesi Nduom on the ticket of the PPP in the 2016 general election and the first woman to have been selected as the party's Presidential Candidate.

Brigitte Dzogbenuku is the founder and Executive Director of Mentoring Women Ghana (MWG), which inspires and empowers young women and girls to make a positive difference in their communities.

Her commitment to the cause won her the Fortune/Goldman Sachs Women's Leadership Award in 2008.

Paa Kow Ackon, National Secretary, PPP, said the Party would promote progressive principles, policy for education of all, the power to the grassroots and provide infrastructure of care to Ghanaians to flourish in all spheres.

He described the Party as the third-largest opposition party having contested two major elections.

Paa Ackon said the Party would “pay any price...to guarantee its survival and win the 2020 general election.”