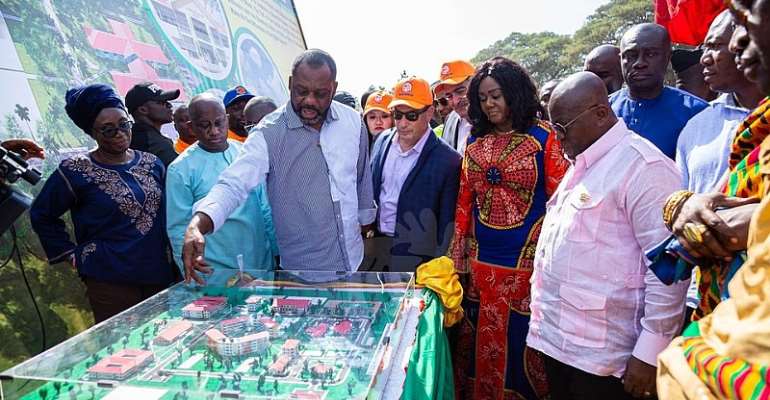 The opposition National Democratic Congress (NDC) launched their manifesto on 7th September, 2020 and unsurprisingly they have essentially copied the current governments policies and ideas which are already being implemented and presented them as novel ideas.

On page 72 of the manifesto under sub-section 7.2.4, every item listed from A to K is already being implemented under this current government.

Below are the promises in the NDC manifesto and responses to every single one of them,

a. The NDC promises to provide free Technical and Vocational Education at the secondary and tertiary levels

Under the current NPP government, TVET is already free and has been free since September 2017.

b. They promise to Implement a free National Apprenticeship Programme by establishing centres in TVET institutions in districts to provide free training and sponsor youth for free apprenticeship training with certified master craftsmen/women

Free apprenticeship training is also already taking place under this government under a project known as the Ghana TVET Voucher project which provides training to Master Craft Persons and their apprentices with over 13,651 beneficiaries have received

free funding for training and completed at least one CBT unit as at August 2020 under the NPP government. The training has been taking place in the following trade areas; Automotive Repairs, Cosmetology, Garment, Construction (Welding), Consumer Electronics, Plumbing, Electrical Installation, Block laying, Tiling, Furniture making and Catering and Hospitality.

In addition to this, the 200 million-dollar Ghana Jobs and Skills Project (GJSP) which has already received Parliamentary approval is scheduled to start January 2021 and has allocated at least $80 Million for apprenticeship training.

c. Commence a programme for the establishment of ultramodern and fit-for-purpose Technical Institutes in all regions that do not have any

Indeed, Parliament in 2019 approved the master framework agreement, commercial EPC contract and funding for phase 1. Implementation for phase one is on course and processes have started for phase 2. The locations for Phase 1include, Asem, Kumasi, Akyem Awisa in the Eastern Region, Tolibri- Lawra in the Upper West Region, Patuda in Bono East, Dambai in Oti, Boako in Western North, Salaga in Savannah, Guabuliga in North East, and Kenyasi No.1 in the Ahafo Region.

Additionally, the NPP Government is undertaking the following:

· Upgrading of 17 Technical and Vocational Institutes

· Building of office to support the unit responsible for TVET Examination (ColTecK, Kumasi)

· Additional infrastructural and equipment is being provided at all Technical Universities to achieve quality delivery at the Tertiary Level with industry 4.0 standards.

To start with, there is nothing like NABPTEX and COTVET standards. This is a clear indication that they do not understand the TVET sector. For a party that seeks power, they should at least inform themselves of what is currently happening in the TVET sector. The Education Regulatory Bodies ACT, 2020 (ACT 1023) which was assented to by the President on 21st August, 2020 has merged COTVET and NABTEX to ensure greater regulatory performance and as such there is no COTVET and NABTEX but rather a Commission for TVET.

In addition, Sector Skills Bodies have now been established to lead the generation of Occupational Standards for TVET and that is the best way of ensuring that there are no skills mismatches in the world of work and the labour market.

e. Rebrand Technical and Vocational Education and Training (TVET) to promote interest and acceptability amongst the youth as a programme of first choice and provide incentives for TVET students and instructors

To re-brand TVET requires a holistic approach and that is why under the NPP Government, the Ministry of Education through COTVET launched the MyTVET campaign on 12th June, 2019 to among other things rebrand TVET using tools such as;

The first skills competition was organized in 2018 and Ghana subsequently became the 81st member of WorldSkills International in 2019 which will pave the way for Ghanaian students to compete with their contemporaries from the world’s superpowers such as China, the USA, UK and Russia. COTVET is also piloting TVET career guidance and counselling in 100 JHS across the country. 50 TVET clubs were expected to be set up this year but due to COVID-19 restrictions, it has been rescheduled to 2021. Over 40 TVET role model videos have been developed and being promoted on social media and TV.

f. Re-launch the Skills Development Fund (SDF) to serve as an intervention fund to cater for TVET graduates and others who venture into self-employment

There is no need to re-launch something which is already happening. The NPP government is currently collaborating with DANIDA to deliver SDF II. A simple Google search will reveal that SDF is currently operational. The $200 million jobs and skills project which has been approved by parliament has a component for the creation of a Ghana Skills Development Fund. 60 million dollars has been committed as a seed money for this Ghana Skills Development Fund.

g. Encourage and provide packages for females to enrol and be retained in male-dominant vocations

There is also the Gender Policy and Gender Manuals that supports the TVET activities that are being implemented.

From 2018 when the NPP Government began the implementation of the 5-year Strategic Plan for TVET Transformation (2018 to 2022) TVET Facilitators/ Teachers have been provided with a lot of training programmes (some locally and others internationally).

Also, the NPP Government has converted The College of Technology Education, Kumasi (COLTEK) to a full-fledged University which will now be known as the University of Skills and Entrepreneurial Development and will focus mostly on training of TVET teachers. The mandate of the institution is training highly qualified technical and vocational teachers and other professionals.

i. Intensify practical and theoretical knowledge in technical and vocational training

COTVET has been implementing Competency Based Training (CBT) since 2017 which is industry led and demand driven as well as hands-on. Indeed, CBT started in 2007, but was abandoned by the NDC when they took over in 2009, and has been revived under this current government. Expanding the implementation of CBT across the TVET landscape is captured as one of the goals in the 5 years Strategic Plan for TVET Transformation. This again shows that they are aware of what goes on in the TVET and Skills development space.

j. Regularly engage stakeholders to narrow the gap between industry and training

Under the NPP government, the Ministry of Education through COTVET has set up Sector Skills Bodies with membership drawn from industry to ensure curriculum and standards emanate from industry and thus remove all gaps that may exist. •Also, to resolve this concern, the government through MoE and COTVET has conducted a needs assessment of over 200 Institutions as well as a Skills Gap Analysis and Audit priority sectors.

Innovation, technology and entrepreneurship are already being catered for under the Competency Based Training (CBT) curriculum. In addition, the Ghana Jobs and Skills Project which has been approved already by Parliament focuses on Skills, Technology, Innovation and Entrepreneurship and budgetary allocations and provisions has been made for them.

Also, the registration and accreditation system of COTVET has been digitized and ready to be deployed in October, 2020. In addition to all these, the government would in the coming weeks distribute tools and equipment to Master Craft Person’s and apprentices as a way of promoting entrepreneurship.

Finally, COTVET has adopted World Skills Standard Specifications which is globally being used by the World’s upper powers. Ghana is also partnering with Worldskills Germany, China and Russia in an exchange program on the implementation of online skills competition.

From the above, it is clear that all the ideas in the NDC manifesto, particularly with regards to TVET are already being implemented by the current government. There is no new idea being introduced as Ghanaians must see the NDC for who they are. In the coming days I will dissect other aspects of their manifesto especially with regards to education.

The author Albert Opare is a social commentator and political activist.