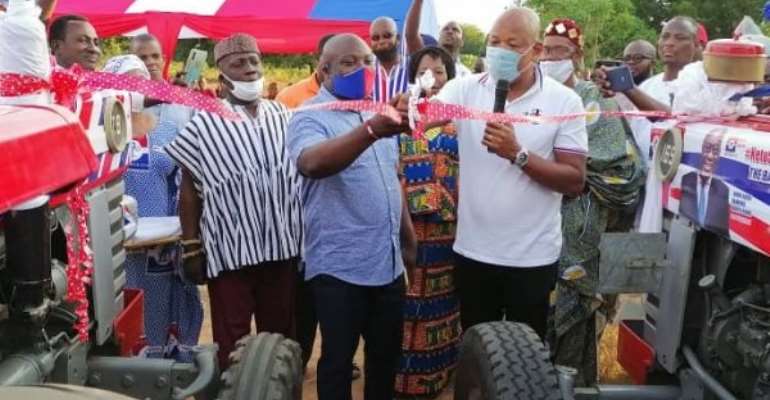 It is high time voting pattern in the Ketu South Constituency of the Volta Region changed to pave way for massive development of the area, particularly under the New Patriotic Party (NPP).

It has therefore become critical that change is restored in Ketu South to patch up the long years of underdevelopment in the area.

These declarations were made by Mr. David Tiahno Quarshie, the Parliamentary aspirant of the ruling New Patriotic Party (NPP) for Ketu South.

He said unlike the opposition National Democratic Congress (NDC), which had enjoyed tremendous support from the Constituency without doing much for its people, the NPP would show gratitude for the people's support by providing their development needs.

Mr Quarshie, who made the call during the inauguration of two farm tractor services under the 'Ketu South Shall Prosper Initiative' said the NPP had the needs of the people at heart and would work towards addressing them when voted into power.

“Since the onset of the Fourth Republic in 1992, we've been voting for the NDC but there's very little to show for that loyalty. An NDC government means we get Ministers, Deputy Ministers, Members of Parliament (MPs), and Municipal Chief Executives (MCEs). All these people come from here but what is there to show? he asked.

“Now, we have just the MCE as our own in this government and we're seeing what he's doing. I'm yet to be your MP but you can see what I've started doing years even before now. Our vote for the NDC over the decades has been a waste. Vote for me and the NPP for change and development,” the aspirant indicated.

“Disregard claims that NPP doesn't like Ewes, NPP discriminates against Ewes and that the NDC party is for Ewes. All this is false. Your vote is your power and so consider what you stand to benefit when you give your power to a political party. Decades of loyalty to the NDC brought nothing. Vote NPP for best results.”

Mr. Elliot Edem Agbenorwu, MCE for Ketu South, said the tractors would benefit many farmers in the Municipality.

He said there was the need for the December elections to be a turning point in the area for residents to start giving their vote to the NPP saying even “if it's a curse, we'll break it this time.”