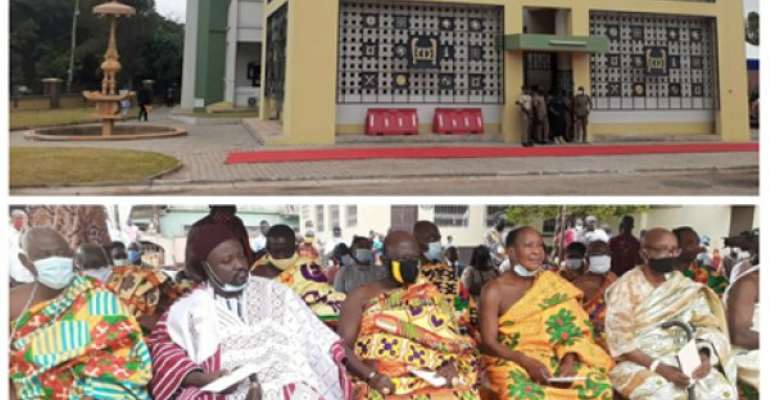 The Asantehene Otumfuo Osei Tutu has thrown a challenge to chiefs and traditional authorities as custodians of the land, not to trade their hard-won, preserved heritage for politics as the electioneering season heats up.

According to the Asantehene, it was hard time chiefs are dedicated to their heritage and further took their rightful place in the nation-building.

Otumfuo Osei Tutu, who was speaking at the commissioning of the refurbished offices of the National House of Chiefs in Kumasi, said chiefs must not renege on their responsibility of providing wise counsel to politicians to build a stronger nation.

He said it was disheartening that chiefs were gradually being relegated to the background in national discourse despite being major stakeholders.

"Nananom, it is because maybe we are reneging on our duties. As fathers of this nation, chieftaincy has been in existence before politics and that makes you fathers, so why are you not recognized as such?. Some of us go to politicians begging them to do certain things for us instead of them coming to us for advice" Otumfuo lamented.

He advised them to let the politicians rather approach them for advice and direction, saying that, if they continued to go to the politicians for whatever benefits, they would be selling their heritage to them at the expense of their people.

He said the relevance of the chieftaincy institution, in general, would be judged by how chiefs conducted themselves for the benefit of their people and the country as a whole.

Otumfuo Osei Tutu commended the House of Chiefs for the initiative to renovate the office building, which had not seen any renovation for many years.

Mr. Kofi Dzamesi, the Minister for Religious and Chieftaincy Affairs applauded the leadership of the House for elevating the office to a befitting status of the revered chieftaincy institution.

He said the government had released an amount of GHC 3.5 million as a refund for the cost of the renovation of the building and would continue to support the chiefs to effectively play their roles in national development.

The Minister disclosed that an additional GHC 800,000.00 had been released to fund the construction of accommodation for members of the House at Asenua in the Kwabre East Municipality to address the accommodation challenges of Chiefs, whenever, they attended meetings.

Togbe Afede XIV, President of the NHC said though the idea to renovate the building started before he assumed office in 2016, his administration took the decision a step further by mobilising resources from corporate Ghana.

He said apart from the renovation of the office building, they had also digitized their documentations, which he said, had resulted in the quick adjudication of disputes.