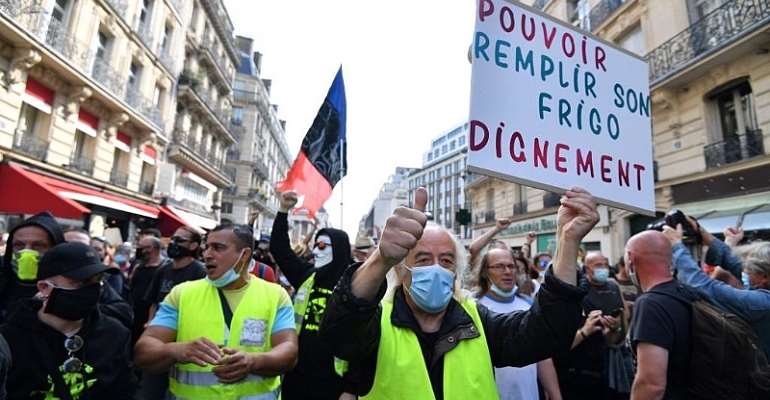 Some 1,000 people have gathered on the streets of the French capital for the first Yellow Vest protest since March, before the coronavirus shut down the country. Turnout was lower than hoped, but anger over inequality remains, as do the habitual clashes with the police.

Demonstrators had dusted down the anti-Macron slogans and put on masks. Among the banners' demands: “Revolution!” “Macron the dictator, off to prison!” “Macron resign!” but also "to be able to fill up your fridge".

The Yellow Vests, or gilets jaunes, are still angry over what they see as the president's prioritisation of business and the wealthy over struggling ordinary families.

“We've been shelved, smashed, but the anger is there,” said Jérôme Rodrigues, a key figure in the movement since its inception in the autumn of 2018.

“In households, in companies, it may not be yellow, but it's there," he told journalists at the start of Saturday's march. "The people who held France together during the two-month lockdown – the health workers, cashiers, rubbish collectors – those are the Yellow Vests."

Fifty or so nightclub owners, not quite the workers Rodrigues had in mind, joined the rally, furious at still not being able to reopen their businesses since lockdown due to concerns over the spread of Covid-19.

Some are now seriously in debt.
“We've been on hold since 13 March, today we're in agony,” Morgan Dalle, who runs a discotheque in the Pas-de-Calais region, told Le Monde. While his 10 staff are on furlough, he's had no revenue for the last seven months.

“We have no specific financial aid and we're the last sector not to have started working again,” he said.

Others had come to show support for a movement they still believe in.

“I am here to show solidarity for a pacifist movement with legitimate demands,” 60-something Nathalie told RFI. “I just want more equality, more justice in the workplace, so that workers aren't just objects you use and then drop once they're no longer useful or profitable.”

Some appeared dejected over the low numbers.
"The movement is dead, I'll say that clearly, but we're here because we have nothing to lose,” 43-year-old Michael, told AFP at Place de Wagram in northwest Paris.

But 48-year old Stephane has kept the faith. "The movement has been struggling in recent months but it will never die”, he said. "As more people are laid off from their jobs, they'll increasingly wake up."

The demonstrations were authorised in two parts of town, but banned on the Champs-Elysées where many of its select storefronts had been boarded up in anticipation of looting.

“We cannot have destruction and chaos on the Champs Elysées,” Paris police chief Didier Lallement told BFM television Saturday morning. “There's a need for calm on this avenue which is a showcase for our country. So I banned the demonstrations.”

The rally began peacefully, but clashes soon broke out at place Wagram and Boulevard Pereire, both in the northwest part of town, as demonstrators tried to move towards the famed avenue.

Protesters set fire to bins and threw projectiles at police. At least one vehicle was set alight. Police used tear gas and grenades to break up the crowds.

Some 193 people had been arrested by around 2:15 pm, largely for carrying objects like screwdrivers, ice axes and knives that "have no place at a demonstration," the police posted on Twitter.

Interior Minister Gerald Darmanin on Friday announced slightly tougher rules on how police were to use controversial rubber bullets (LBD) and other crowd-control weapons, the use of which has sometimes led to severe injuries.

Police now use a new defensive grenade known as GMD, said to be less dangerous than the previous one.

And they must ask supervisors for permission to fire the projectiles.

Yellow Vest marches were announced for other major cities in France including Marseille, Toulouse, Lyon and Lille.

The authorities refused to authorise the rally in Toulouse, a former hotspot for the protest movement, citing concerns over the spread of the coronavirus.