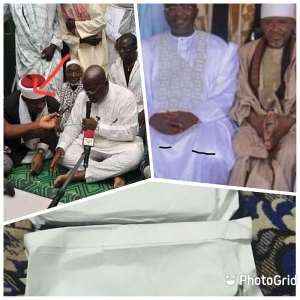 It is unusual for the Council of elders to bring this matter to public attention, but as circumstances demand, it is worthy to make our position known to all well-meaning Ghanaians. The Head and Council of elders of the family of the late Dr. Suleman Mahama Haroon Bakuri has turned down the GH¢20,000 donated by the Vice President, His Excellency, Alhaji Dr. Mahamud Bawumia.

We the elders of the family wish to state that, the donation though well-intentioned is belated as the final funeral rites have already been performed. Besides, the Vice President never showed up in person to mourn with the family when he paid a visit to the region on the 7th of September, 2020. The money was only sent through the constituency Chairman of the NPP for Wa Central which is unethical.

The Imam lamented, that the very party he is accused of being sympathetic to when he offered prayers for the leaders of the NPP and the nation during their visit to the Region at the Central Mosque on Friday to fraternize with the Muslims in the run-up to the 2016 electioneering campaign is now the party that supports rivals factions to depose him.

Isn’t it ironic, that neither the President nor his vice found it worthy to attend any of his funeral celebrations nor visit the family to mourn with them even when they visited and toured the Region, yet find it expedient to send money through others to be donated to the family?

The family however wishes to express its sincere gratitude to the last minute kind gesture by the presidency and wish to state that it however came too late when the final funeral rites has been performed.

The family wish to state however, that it would continue to pray for good health for the President, his vice, Ministers of State and all our national leaders and also pray for Allah to give them wisdom and guidance to continue to lead the nation on the path of progress, development and prosperity. ASALAAM ALAIKUM

(HEAD OF THE LIMANYIRI FAMILY)