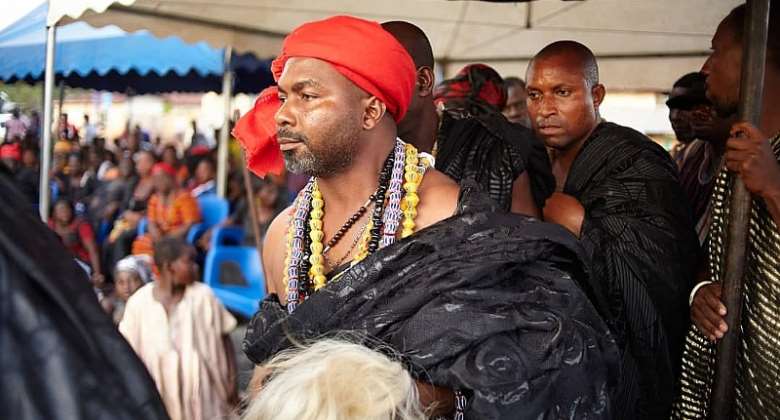 The people of Fodome in the Hohoe Municipality have breathed a sigh of relief as the kingmakers of the Taxoe Clan in Fodome Helu, customarily, presented a new Togbega Gbedegbleme's Senior Omankrado for installation in pursuance of the Chieftaincy Act 759 of 2008, Section (62), Subsection (2) of Ghana, by the customs and traditions of Fodome Traditional Area.

For fifteen years, this titled office has remained vacant after the demise of the Senior Omankrado of Fodome Traditional Area, Togbe Akuamoah II in 2005.

The outdooring of the new Omankrado, Togbe Gbornugbe II, took place in a grand ceremony at Fodome Helu on Thursday, September 10, 2020, amidst a display of joy and cultural elegance.

Before his enstoolment, Togbe Gbornugbe II is known in private life as Mr Gbornugbe Denis Komla and acquired an accomplished entrepreneurial skill in the pharmaceutical trade.

By order of Fodome chiefship, the senior Omankrado, holds the key to Fodome. His is the right-hand chief to Togbega Gbedegbleme, the Paramount Chief of Fodome Traditional Area, and act as the senior attorney for all citizens and strangers who had any dealing with the paramount chief. As such, he acts as the primary agent for channelling all cases to the paramount chief.

Also, the ritual embodiment of his titled office makes the Senior Omankrado the custodian of all laydown customs and rituals that pertain to Fodome on behalf of the paramount chief.

Delivering his inaugural speech, Togbe Gbornugbe II has, first, affirmed his readiness to unite all chieftains in his clan—the Taxoe clan. He appreciated the chiefs, queen mothers, elders and all well-meaning individuals for showing support for him during his enstoolment.

Also in the ceremony, the Paramount Chief of Fodome, Togbega Gbedegbleme Akpatsa II, who doubled as the chairman expressed his sincere appreciation to his citizens for their show of support throughout the event.

Avowedly, the Paramount Chief declared to the chiefs and people his preparedness to install new occupants for other remaining titled offices under his authority, who are currently without chiefs as soon as possible. To this end, he particularly, mentioned clans like Totinyigbe clan and Dugba clan as next to follow with their installation in the coming days.

Finally, Togbega Gbedegbleme Akpatsa II thanked everyone including the clergy and wished all guests a safe trip back to their destinations.