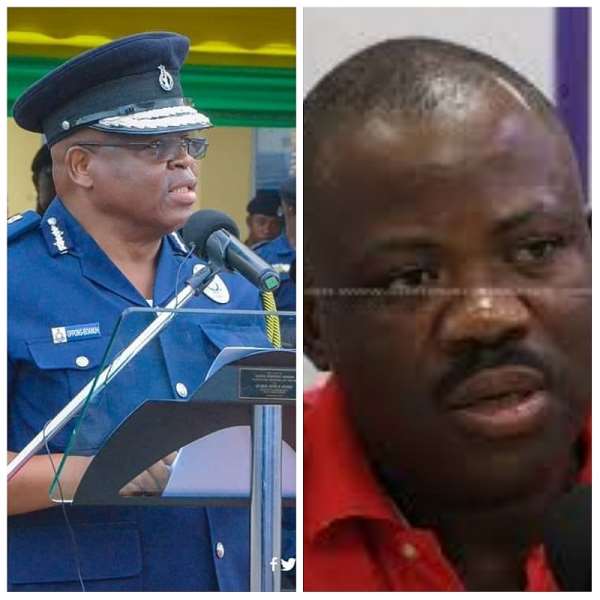 In the past few days, there has been some reports of how the Inspector General of Police, Mr. James Oppong Boanuh indicated that the police will ensure that no foreigner vote in the upcoming General Election.

Contrary to the above, the National organizer of the opposition National Democratic Congress, Comrade Joshua Hamidu Akamba has asked the IGP to shut up and concentrate on his core mandate.

The firebrand organizer contends that, it is not the duty of the IGP to determine who is or is not a foreigner. In an interview with the media, he accused the IGP of being a lame duck and incompetent for his inability to take action on issues that matters to Ghanaians such as issues of security concerns especially during the Voter Registration Exercise which saw several evidence of intimidations of Ghanaians believed to be affiliated to the opposition National Democratic Congress.

“Mr. IGP, let me remind you that you have sat down with your tail in between your legs, whilst state-sponsored violence took the better part of this country under your watch and in broad day light", Akamba fumed.

He continued to explain that, It is very sad that till date, the known NPP criminals who murdered this innocent young trained-teacher in the Banda Constituency are still walking on the streets of Ghana as free men.

What is even more depressing according to Akamba is the fact that the District Police Commander and another Police Officer (Corporal Gafaru), who were determined to pursue this matter to ensure the perpetrators faced the full rigorous of the law have been transferred by the cruel Akufo-Addo government, through the IGP to ostensibly coverup this heinous crime and shield the perpetrators from punishment.

"Mr. IGP, how far have you gotten to regarding the investigation into the issue of Hawa Koomson who fired gun shots during the Voter Registration Exercise?, furious Akamba asked.

To Comrade Akamba, It appears to him that the Inspector General of Police is on a deliberate mission to intimidate Ghanaians and the NDC members across the country hence his call for the IGP to shut up.

The IGP after sitting aloof for general law and order to breakdown under his watch, now he thinks the easiest way to save his sunken image is to deploy a needless intimidating tactic against NDC members during the 2020 elections.

Akamba however ended by saying that, the NDC will do everything within it powers to resist every form of intimidations that the NPP may want to use to rig the elections while citing the Ayawaso incident to support his claims.