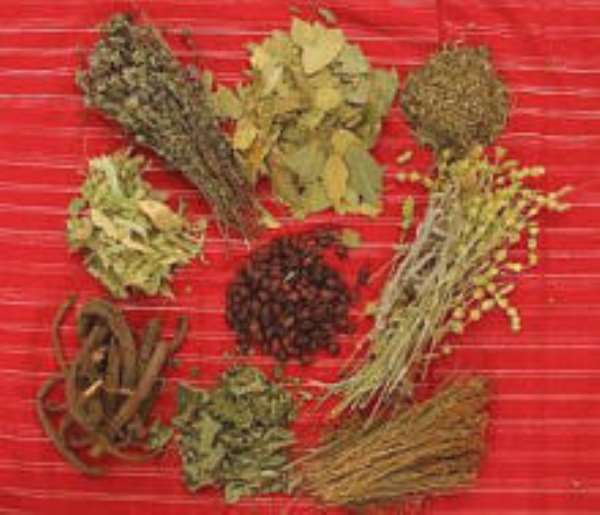 As health care gets increasingly expensive and ineffective in many African countries, a growing number of people are turning to traditional medicine. The World Health Organization estimates seven out of 10 people in Africa rely on traditional herbal medicine. In many countries, however, these drugs are not certified and their use raises safety concerns.

The place is a herbal treatment center in the Ghanaian capital, Accra. Men, women, young and old, are waiting in the corridor on the balcony and under trees on the compound. They are here to see Dr. Moses Danquah, a trained herbal pathologist and head of the Monadak Plant Medicine.

"I'm very good at chronic cases, such as strokes, tumors in the head, fibroid, and I think a lot of injuries…brain disorders, general weakness and so forth," he said.

Dr. Danquah says he sees over 300 patients on a typical day at the clinic. On this particular day, there are about 150 patients waiting, some in wheel chairs.

Reverend Watchman Bruce has been paralyzed for four years. He says he started treatment at the center a year ago, after canceling a surgery at a teaching hospital to correct his condition. He says he is happy with his treatment here.

"Formally, I was not having feeling from my lower part, when you touch me, even when you use a needle to touch my body, I don't feel it," he said. "And I can now move my legs and also I can stand and walk about a few feet away, so the improvement is so great."

Also waiting at the center is Jane, a diabetic diagnosed with a kidney condition who needs dialysis.

Unlike Reverend Bruce, Janet says, money for treatment was an issue. She also says she does not intend to go back to the hospital. Instead, her aunt Esther brings her here on a weekly basis.

"Because the herbal treatment has actually stopped the anemia. They [medical doctors] thought the only thing to sustain her is to go on the dialysis and now she has regained her weight and everything seems to be normal at the moment, her blood sugar also ok, close to normal," said aunt Esther.

Some of Dr. Danquah's patients, like Afriyie, a Ghanaian who lives in Europe, have traveled from abroad to find a cure where modern science has failed.

"I'm here purposely for my daughter. She is got autism, which is something that's connected to her brain, and the medical doctors are saying they haven't got any help for her," said Afriyie. "But I strongly believe the herbal medicine can work. …and seeing the doctor I think with some few consultations, I have been able to see some improvement in my daughter."

Many of the people who visit this center have access to modern health facilities, but for various reasons, have either given up on modern methods or are combining them with more traditional, plant-based medicine. But, for many, traditional health healing is the only available method.

Research indicates at least 60 percent of Ghanaians use traditional health medicine, either because it is cheaper, more convenient or simply believed to be more effective.

"The mistrust between the traditional healers, the research institutions and the orthodox doctors made it such a way that we have lacked behind for quite sometime," he said. "But thanks be to God that the situation is changing."

Edith Andrews-Annan is the representative for essential medicines for the World Health Organization in Ghana. She says she also recognizes the need to combine traditional and modern practices.

"You know there are so many people who live in areas where there are no health facilities, and so the first point of call for these people is to see a herbal practitioner," she said. "So the WHO thinks that this process has to be helped, because we have to look at quality, the safety and the efficacy of these herbal medicines."

The Ghanaian health authorities are launching a program to make traditional medicines safe for the public. The plan will be overseen by traditional health practitioners, WHO, Ghana's Food and Drug Board, Center for Scientific Research into Plan Medicine and Nuguchi Memorial Institute for Medical Research.

The government's first big task under the plan is to compile a list of recommended traditional herbal medicines.

Experts say that once the program gets going, Ghana stands to save millions of dollars on imported drugs.