Finally Action Against The Bagre Havoc 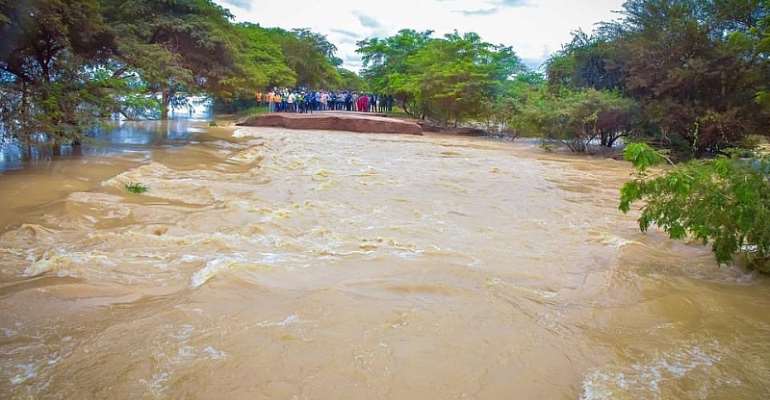 Over the years, the Bagre Dam in Burkina Faso has not relented in its havoc-laden spillages.

For a political party which has spent more years than others at the helm, it is regrettable that no effort was made to stop the perennial ritual of destruction by the said grouping, of course, the National Democratic Congress (NDC).

Diversion of funds intended to reverse the annual havoc took place, information gathered has indicated. But for the anomaly, the flood waters would have been used for productive agricultural ventures in a part of the country where drought is endemic. We would have been composing stories of exportable harvests of vegetables and legumes.

Thankfully, something is being done to avert the destructive spillage which has in the past few days claimed a record ten lives and destroyed property whose value is whopping in monetary terms.

What others failed to do is being done for the good of the people as the $1 billion Pwalugu Dam project is progressing steadily.

During his recent trip to the northern regions, the Vice-President explained that the project would halt the perennial destructive spillage. Rather than being destructive, the excess water would be productive.

Those who should have acted to obviate the disturbing headlines were more interested in lying to the people and announcing the imminent spillage and its attendant destruction.

The action being taken is ongoing unlike the contents of a certain Green Book of lies.

When it is completed, the Pwalugu Dam project would change the course of the annual destructive spillage and inure to the benefit of farmers in the affected areas and the country as a whole.

Something which has been ignored for many years is now on the front burner and that is the joy about the Pwalugu project. This is what is expected of a government which is truthful and sincerely works for development and not the next election.

There is no gainsaying the fact that the flagship projects of the government such as 'Planting for Food and Jobs' and the 'One District One Dam', among others, would stand to benefit immensely when the project is completed.

An added source of excitement is the confidence that would be restored in the people of the Upper East and North East regions who are in the face of the massive havoc.

It is our hope that the people in the affected areas would not go through this harrowing occurrence again when the Pwalugu project is in full flight.

Ken Agyapong is only brave on NET2 TV but actually a coward ...
16 minutes ago