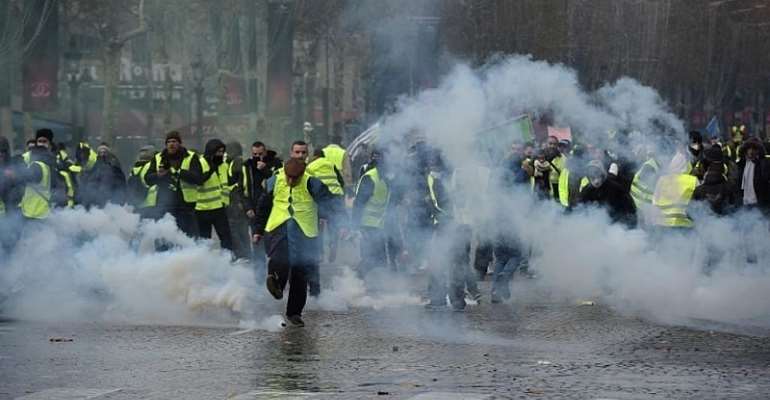 Organisers of France's Yellow Vest protest movement have called for a major demonstration on Saturday on the Champs-Elysées, despite police orders forbidding access to large areas of central Paris.

Invoking the potential risk of public disturbances, the Paris police chief, Didier Lallement, has forbidden any meeting of Yellow Vest supporters in central parts the French capital, including the Champs-Elysées shopping area, the official presidential residence at the Elysée Palace, or the seat of French government at the National Assembly.

Several previous Yellow Vest demonstrations have resulted in pitched battles and the widespread destruction of property.

Officials expect up to 5,000 protesters in Paris on Saturday, with about one quarter of them described as "potentially violent", a police source told AFP.

On Friday, thousands indicated on social media that they planned to join the banned Champs-Elysées demonstration.

One of the key figures of the movement, Jérôme Rodrigues, has called for "complete civil disobedience".

In an internet message, Rodrigues, who suffered eye and facial injuries during a Yellow Vest demonstration in January 2019, called on activists to refuse to present their identity cards to police officers on Saturday.

"Even, if you have to make a little detour to the local police station to have your ID checked, which will take four hours," his message continued. "Between losing an eye and giving them hell...just refuse all cooperation."

In a separate internet exchange with the police union Synergie-officiers, Rodrigues compared the forces of law and order in the French capital to "a bunch of Nazis".

Police representatives have promised to take legal action against him. Interior Minister Gérald Darmanin expressed his full support for the officers.

The Yellow Vest movement began on 17 November 2018 as a citizens' reaction to government proposals to increase fuel taxes.

Gradually broadening its anti-elitist call for increased social and fiscal justice in France, many of the weekend protests degenerated into violent clashes involving demonstrators, anarchists, criminal elements and the police.