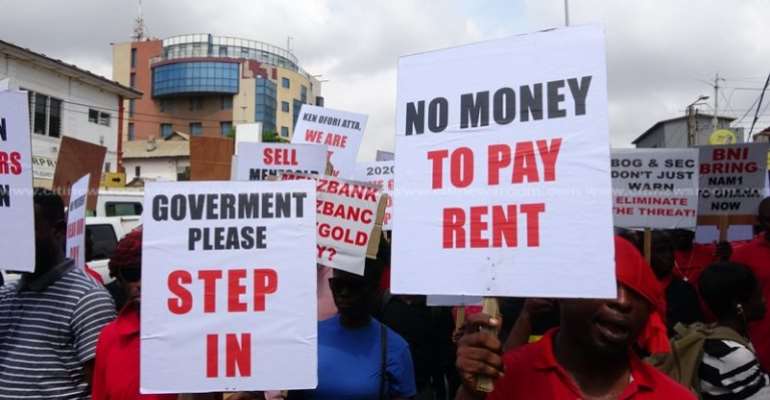 The Ghana Police has stopped aggrieved customers of the defunct Gold Dealership Company, MenzGold from a planned anniversary protest in pressing home their demands for settlement after two years of their financial dilemma.

This comes on the back of the Police securing an interim injunction from the court against this action.

Inspector-General of Police (IGP) James Oppong-Boanuh filed an injunction to prevent the event, which is being championed by the Coalition of Aggrieved Customers of Menzgold, Ghana, from being held.

“It is hereby ordered that the respondents, the Coalition of Aggrieved Customers of Menzgold Ghana, Isaac Nyarko and Fred Forson are hereby restrained from the intended demonstration to commemorate two years of the collapse of Menzgold Company,” the injunction document signed by Justice of the High Court, Justice Stephen Oppong directed.

The Coalition announced a wreath-laying ceremony in commemoration of customers who lost their lives as a result of the locking up of their investments.

Leaders of the Coalition wrote a letter to the IGP requesting for security during demonstration exercise slated for September 12, 2020.

“Since the collapse of the company, we have lost over 60 members and many have become bed-ridden due to the continued lock-up of our investment in Menzgold. It is our expectation that your outfit will provide security to help bring the programme to a successful because it will be highly-violent free. The programme is expected to last for two hours with an expected attendance of more than 200 people,” the Coalition said in a statement to the IGP. Menzgold collapse

Menzgold was asked to suspend its gold trading operations with the public by the Securities and Exchange Commission (SEC) in 2018.

According to the SEC, Menzgold had been dealing in the purchase and deposit of gold collectables from the public and issuing contracts with guaranteed returns with clients, without a valid license from the Commission.

The company was however cleared to continue its “other businesses of assaying, purchasing gold from small-scale miners and export of gold.”

Despite initial protests, Menzgold complied with the directive.

Two years on, the company has failed to fully pay its numerous aggrieved customers the value on their gold deposits as well as their entire investments.