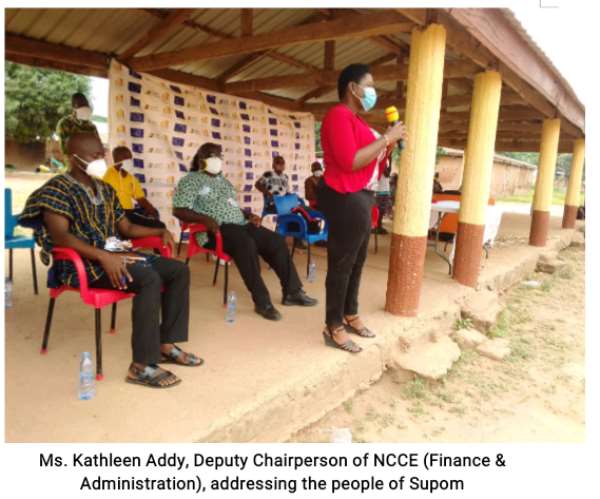 Residents of New Kyeiase have appealed to telecommunication firms to extend mobile services to the area. The residents assured the Telcos of their preparedness to provide the needed site for the construction of a mast in the community.

The people who for ages have been without ‘network’ made this appeal during the annual Social Auditing Durbar at Supom, New Kyeiase in the Kwahu Afram Plains North District in the Eastern Region. The durbar, organized by the National Commission for Civic Education (NCCE) provides platform for duty bearers or those tasked with the responsibility of implementing government activities to render account to the people. The event brought together Departmental Heads, Religious Leaders, Chiefs, PWD’s as well as people drawn from the Supom Community and its environs.

Addressing the gathering, the Deputy Chairperson of NCCE in charge of Finance and Administration, Miss Kathleen Addy assured the people of the Commission’s resolve to encourage participatory democracy in every part of the country. She said concerns raised during the durbar would be communicated to appropriate institutions for response. She emphasized the importance the Commission attaches to Social Auditing Durbars as it affords the citizenry the opportunity to scrutinize the programs of government at the same time making duty bearers entrusted with implementing such programs take responsibility for their actions and inactions.

The Kyidomhene of Supom, Nana Anane Gyansah who represented the Chief, appealed to the DCE for their share of developmental projects in the community. He called for the completion of the Clinic at Supom as well as construction of a new Primary School block and Senior High School, provision of ICT laboratory for the JHS, a drainage system and a lorry station for the community.

The District Chief Executive for Kwahu Afram Plains North, Mr Samuel Kena highlighted a number of projects being undertaken in the Community by the District Assembly. He said the Assembly has finished constructing the Supom Market and the contract has been awarded for work to begin on the construction of a new Primary School block. He said the Assembly will not renege in efforts to make the community enjoy mobile network services and discussions were underway with some mobile network providers to offer such facilities in the community.

The District Director of Agric, Mr. Philip Azidoku appealed to the people to take advantage of the government’s ‘Planting for Food and Jobs’ as well as ‘Planting for Export and Development’ programs. He assured the people of the availability of extension officers to help them in their farming activities.

Mr Bilali Yakubu, for his part, sensitized the people about the role and responsibilities of Assembly members in development planning for the district. Mr. Yakubu, who is the District Planning Officer reiterated the importance of forming Area Councils for local government administration at the community level. He charged the people to equally put their elected assembly members to task.

The District Director of NCCE, Mr.Ofei Nkansah appealed to the people to eschew all forms of violence during the upcoming General Elections. He said the NCCE shall play the role expected of it in ensuring peaceful elections in December. The Director appealed to the people to tolerate diverse opinions. He used the occasion to sensitize the people about the COVID 19 protocols emphasizing the need to adhere to the wearing of nose masks and periodic washing of hands with soap and practicing social distance.