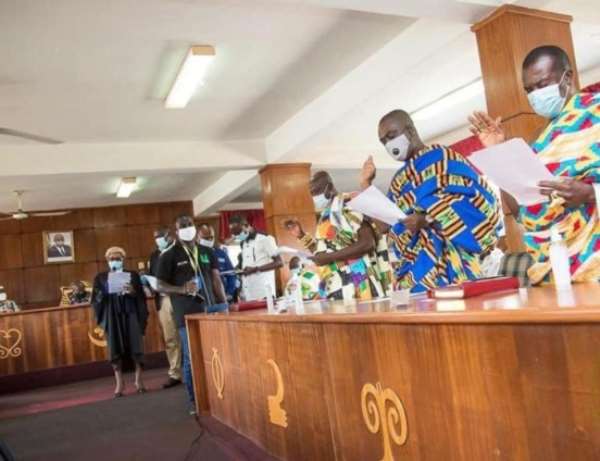 The Bono East Region has become one of the first six regions to formally commission a Regional House of Chiefs.

Seven paramount chiefs out of 11 paramountcies in the region took oaths of office, secrecy, and alliance administered by Abraham Graham, a circuit judge.

This happened during a working visit by the President of the republic Nana Akufo-Addo where he inaugurated the House of Chiefs.

The colourful ceremony which took place at the auditorium of the Valley View University in Techiman was witnessed by the Chieftaincy and Culture Minister, Kofi Dzamesi; the Regional Reorganization Minister, Dan Kwaku Botwe; the Agriculture Minister, Dr. Owusu Afriyie Akoto, and a host of officials on a tour with the President.

President Akufo-Addo said the idea behind the creation of additional regions by the NPP administration was to accelerate development in all parts of the country.

He said the institution of chieftaincy had been an indispensable part of the country's democracy and development and since 1992 governments had made significant strides to strengthen the institution and their roles in development.

In that direction, the President said the government had made funds to refine traditional laws and codify them into the country's laws and called on traditional authorities to help do away with outmoded traditional laws that are inimical, especially the ones that hamper the development of women.

He bemoaned numerous chieftaincy disputes and their attendant negative consequences such as loss of lives, destruction of properties, among others.

The President acknowledged the roles of the traditional authorities in educating their subjects to abide by the Covid-19 protocols.

President Akufo-Addo also said his government was doing everything possible to develop the country and asked the chiefs to continue to support his administration to deliver.

He later presented two vehicles to the house, a Toyota Land Cruiser and a pickup for the use of the president of the house and also for administrative purposes.

Mr. Dzamesi, in his address, assured the chiefs that funds had already been approved for construction of the Bono East Regional House and said President Akufo-Addo needed their support to be able to continue with all developmental projects earmarked for the region.

The Bono East Regional Minister, Kofi Amoakohene, on behalf of the chiefs, thanked the President for his prudent leadership for the country and said their appreciation would translate into votes in the 2020 elections.