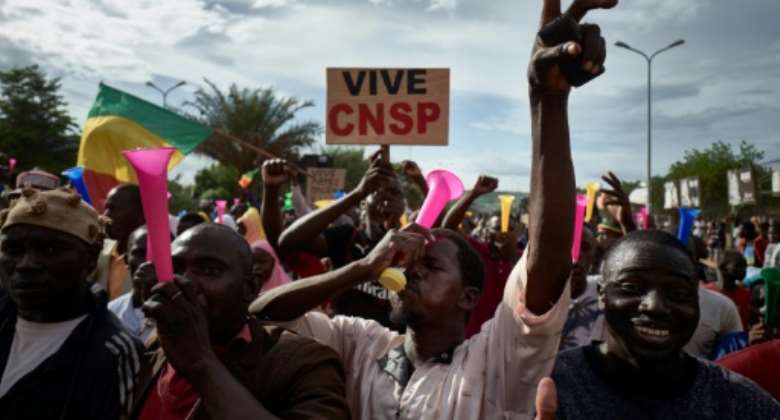 Supporters of the military junta, which calls itself the National Committee for the Salvation of the People, or CNSP, take part in a rally in Bamako this week. By MICHELE CATTANI (AFP/File)

A forum in Mali debating how to restore civilian rule will on Friday discuss a proposal to appoint a two-year transitional government, heavily influenced by the military junta.

The proposal, made by junta-appointed experts, has been submitted to about 500 participants from political parties, unions and NGOs, at a three-day conference in the capital Bamako.

The talks mark the second round of discussions between the young officers who overthrew President Ibrahim Boubacar Keita on August 18 and civilian representatives, many of whom had campaigned for him to resign.

The junta, just hours after the coup, pledged to restore civilian government and stage elections within a "reasonable time".

But many participants at the forum are divided over issues such as how long a transition government should last, and what role the army should play.

Under the proposals to be discussed on Friday, which were seen by AFP, the military would retain a strong hold on government.

A two-year transitional government would be led by a president picked by the army, for example, although the text stipulates that the office could be filled by either a "civil or military personality".

The president would also nominate the prime minister, according to the text, and an army officer would lead a proposed 51-member legislative body, dubbed the "national transition council".

Whoever is appointed president would be unable to run for president at the end of the two-year transition, however. The prime minister would likewise be forbidden from running for office.

The delegates to the Bamako forum have separated into five separate groups to discuss the text, among other issues.

The junta had initially talked of a three-year transition, corresponding to the time left in Keita's second five-year mandate, that would be overseen by a soldier.

The coup -- Mali's fourth since gaining independence from France in 1960 -- came after months of protests, stoked by Keita's failure to roll back a bloody jihadist insurgency and fix the country's many economic woes.

The Sahel state's neighbours have watched with concern, fearing the country could spiral back into chaos -- a scenario that eight years ago helped fuel the jihadist revolt which now rattles Niger and Burkina Faso.

The Economic Community of West African States has taken a hard line, insisting that Mali's ruling army officers hand over power within 12 months. It has also closed borders and banned trade with the nation of some 19 million people.

Given the pressure from the international community, it is unclear how delegates at the Bamako forum will receive the proposals for the two-year transition government.

There are also deep divisions within the so-called June 5 Movement (M5), which engineered the wave of anti-Keita protests in the run-up to the coup.

Mahmoud Dicko, an influential imam who is viewed as the figurehead of the June 5 Movement, has pushed for civilian government. By ANNIE RISEMBERG (AFP/File)

Under the proposals, members of the movement would sit on the national transition council.

Some voices within the M5 argue in favour of giving the military a long handover in order to tackle the problems that have driven the country to the brink.

Others say that this would simply worsen instability -- four more Malian troops were killed in an attack on the eve of the talks -- and set a poor example for democracy in West Africa.

Mahmoud Dicko, an influential imam who is viewed as the figurehead of the June 5 Movement, pushed for civilian government in an interview on national television on Wednesday.

"We have nothing to gain by turning the international community against us," he said.

The talks conclude on Saturday.