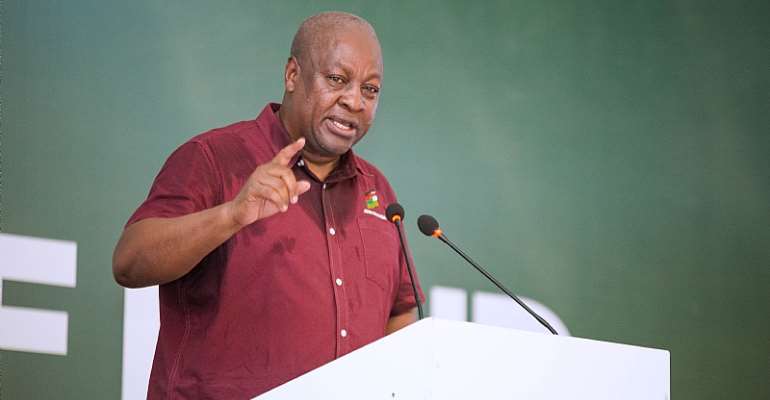 First Vice Chairman of the Asokwa branch of the New Patriotic Party says former President John Mahama is bankrupt when it comes to credibility and Ghanaians would not choose a leader like that.

In a statement released by the vociferous NPP chairman who is known to be a thorn in the flesh of the former president listed a litany of areas where HE Mr. Mahama failed to adhere to his promises hence depicts a lack of credibility.

He, therefore, called on HE Mr. John Mahama to ‘stand and learn from HE Nana Akufo Addo who is busily shaping the tattered economy he left behind’.

The Ghanaian electorate of today are more enlightened pertaining to governance and they are well abreast of issues of the economy, so it is difficult to swindle them.

Recently ex-President Mahama has been making vain promises to the Ghanaian electorate in order to win their votes, meanwhile, he was against the same policies when he was the head of state and steering the affairs of this nation.

During Mahama's tenure of office, he said, "I am not a magician to employ you"... this is what he told unemployed graduates and now he is saying he will create 1 million jobs if he is elected. He also said Free SHS will collapse Ghana's education system but he is now claiming he brought Free SHS.

He further stated he will not restore the teacher trainee allowance even if it cost him his re-election but he is now saying he will maintain trainee teachers and nurses allowance.

Mr Mahama led a campaign to reject the introduction of the Ghana card but he later went to register for the card with his wife.

During his tenure he increased electricity tariff and told Ghanaians if we want light we should pay more, he is also saying he will legalise okada but during his tenure of the office most okada riders were arrested and they were told it is illegal to operate Okada because he wants votes he is trying to say he is holier than the Pope.

As ex-President Mahama said "Ghanaians have a short memory" but I am reminding him what he did when he was steering the affairs of the nation, the biggest scam of the decade was Mahama's $10 billion Hope City project.

With this track record, I think he is credibility bankrupt and needs to stand aside and learn from His Excellency Nana Addo Dankwa Akufo-Addo who is shaping the tattered economy you left.

JUST IN: Mahama lawyers file another motion to compel EC to ...
54 minutes ago