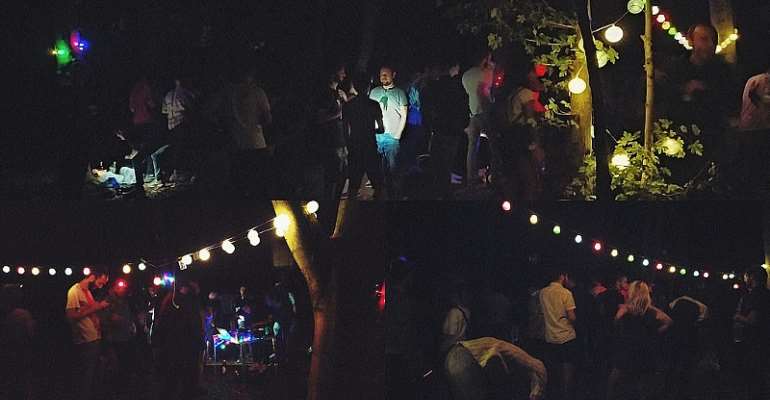 As the French government considers further restrictions of gatherings to limit the spread of the coronavirus, club owners, partygoers and techno fans are finding ways to continue having fun, even if it means breaching the rules.

Licensed nightclubs have remained shuttered in France since March with the authorities arguing there's a high risk of infection if revellers get too close in enclosed spaces.

In one notable example, a Covid-19 cluster of 80 people in Quiberon, Brittany, was traced back to an infected bakery worker who'd attended a local nightclub.

Frustrated over being denied a dance floor, techno fans are partying in secret.

Unauthorised "free parties" have sprung up around the capital, notably in a massive area of woodland on the east side of Paris known as the Bois de Vincennes.

“We more or less followed our ears to get here,” Alex, a 22-year old student, told RFI as she reached one of the dozen or so clandestine fairy-lamp-lit parties held in clearings every Saturday.

She joined a group of around 30 people gathered around a mixing table, amplifier and speaker.

They come to dance, chat and have a drink, just like in a nightclub, but outdoors.

“We began to party with a small speaker, just a few of us,” said Armand, a 28-year old manager who helped organise this free party.

“And then we said we could set up a collective to organise parties in the woods where we're not bothering anyone. There are no neighbours or residents and we wouldn't be squashed up against one another.”

They make an effort to respect social distancing, but no one wears a mask.

“We are taking a risk,” said one young woman, “but I reckon that since there's no physical contact, it's no more risky than going to a supermarket.”

“We don't transmit the virus any more than in any other small gathering going on every day in France,” said Antoine Calvino, DJ and co-founder of SOCLE, a union of French rave organisers.

The law enforcement response to these free parties has been ambiguous though. Sometimes police come and put an end to the raves, sometimes not.

Calvino is open to some kind of regulatory framework so they can organise the parties more serenely.

“We would like to come out of this grey area whereby the police let it go until they change their mind,” he told RFI.

They have had encouraging meetings with Paris city hall.

"Our approach is to come up with a plan," said councillor Frederic Hocquard, "with authorised places where we know what's going on, where parties are registered beforehand and where we warn people of the risks, whether it be the usual risks (alcohol, drugs or STDs) or those linked to the epidemic."

There's a grey area around nightclubs too.
Officially closed until further orders, some have been bending the rules to try and stay in business.

Videos of people dancing in at least two Parisien nightclubs, without masks and not respecting physical distancing, were posted on social media earlier this week.

A “friends and family” evening at the select Raspoutine nightclub, near the Champs-Elysées, showed it fitted out as a restaurant.

By changing their status from clubs to bars and restaurants, the venues can open once more.

“The state has banned the reopening of type P establishments (those with a dance floor), but authorised clients for type N (bars and restaurants),” Patrick Malvaës, head of the French discotheques syndicate (SNDLL) told Le Parisien daily.

“Some colleagues are asking for their clubs to be classified as bar-restaurant to be able to welcome clients,” he continued, adding that there was a certain “tolerance” for this kind of practice in Paris.

The demand to be reclassified as a bar can take up to four months.

According to the Paris police authorities, Le Key Club, one of the nightclubs which opened last weekend, had made no such request and was therefore in breach of the law.

Raspoutine meanwhile had obtained the change in status, the police told France Info radio, but had failed to respect opening hours.

Since the beginning of the summer, 120 nightclubs in France have received formal notice of breaching Covid-19 regulations, 15 have been forced to close down.

In July, workers in nightclubs and discos protested in Paris to urge the government to let them open once more.

According to the SNDLL, more than 300 discotheques in France have gone into liquidation as a result of lockdown.