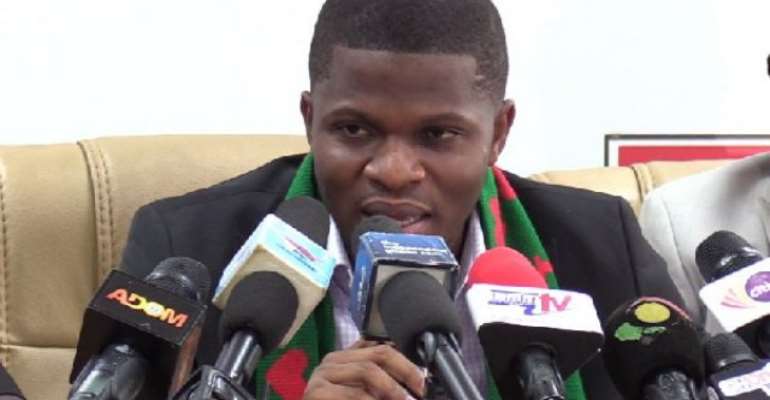 The National Communications Officer of the National Democratic Congress (NDC), Sammy Gyamfi has emphasized that his party is committed to protecting the revenues and royalties of the country when they boot out the ruling New Patriotic Party (NPP) from government at the end of the 2020 General Elections.

According to the communicator, the Akufo Addo-government has very little developmental projects to show, despite having a total resource envelope of about GHS374 billion.

While he notes that the NPP government has prioritized consumption-related expenditures, Sammy Gyamfi insists that the NDC just like in the past will focus on giving infrastructure a massive boost when they return to power to ensure all Ghanaians benefit.

“Governance is all about priorities and choices. The Akufo Addo government chose to spend the unprecedented resources they have had on consumption-related expenditures. We on the other hand, have chosen to spend the resources that will accrue to the next NDC/Mahama government on infrastructural and productive initiatives for the benefit of all Ghanaians. We have done it before and we shall do it again”, a portion of a write-up on the Facebook page of Sammy Gyamfi has said.

Having further accused the ruling government of excessive borrowing in the last 3 and half years to raise the Public Debt stock, Sammy Gyamfi has assured the entire populace that the next NDC government will resolutely protect the revenues and royalties of the country by among other things stopping corrupt schemes like the Agyapa deal and reduce the number of ministries and the number of ministers.

Read the full write-up from the NDC Communications Officer below:

NDC 2020 Manifesto Promises- where shall we get the money from?

For those who are wondering how the next NDC/Mahama government will finance the transformational policies and programs in our Peoples’ Manifesto, please note that:

1. The main reason the Akufo Addo-government has very little developmental projects to show, is not because they haven’t had access to adequate resources. Indeed, no government in the history of Ghana has been so lucky as the Akufo Addo government in terms of the astronomical monies that have been available to it- a total resource envelope of about GHS374 billion, which is nearly twice as much resource that was available to the erstwhile Mahama government (GHS193 billion).

* Despite this, President Mahama with significantly less resources has completely dwarfed the NPP in every sector as far vital development infrastructure of our country is concerned. This shows the NDC's superior track record of delivering maximum with minimum resources.

* Governance is all about priorities and choices. The Akufo Addo government chose to spend the unprecedented resources they have had on consumption-related expenditures. We on the other hand, have chosen to spend the resources that will accrue to the next NDC/Mahama government on infrastructural and productive initiatives for the benefit of all Ghanaians. We have done it before and we shall do it again.

2. Even though the NPP has in 3 and half years borrowed and added to the Public Debt, nearly GHS140 billion way more than the total debt of Ghana from Kwame Nkrumah era to 2016 (GHS120 billion), the percentage of capital expenditure as a percentage of our GDP, has declined from 4.5% in 2016 under the Mahama administration to as low as 1.2%. This again shows the NDC’s superior capacity to do far better with the resources available. Delivering much higher development for Ghana by channelling more resources into infrastructure and productive initiatives which brings sustainable growth, jobs, prosperity and more, as opposed to NPP that concentrates on consumption and profligacy.

3. To achieve the "Big Push" for example, the NDC government will follow this track record, and redirect resources heavily into development infrastructure and thus increase the ratio of CAPEX to GDP from the current low 1.2% to above 4% as was the case in the year 2016 under the Mahama administration.

4. US$10 billion dollar for the big push may appear to be a lot, but when we remember that between 2013 to 2016, about $6 billion was channelled into development infrastructure in Ghana by the Mahama administration, there is no doubt at all about NDC's capacity to do it.

5. If we could do so much for the country with just one oil field (Jubilee field), which in 2016 was not even producing at full capacity- imagine what we can do with three (3) oil fields, two of which came about as a result of John Mahama’s leadership and investments into the oil and gas sector. The next NDC/Mahama government will channel a greater percentage of our oil revenues into massive developmental and productive projects.

6. The NDC over the years, has demonstrated massive creativity in the way we so competently created the environment that allowed a number of organisations to become so financially strong that they were able to use their own balance sheet to borrow without the people of Ghana having to be burdened by way of paying for those debts. For instance, under the Mahama administration, parastatals like:

a) The Ghana Ports And Harbours Authority was able to raise US$1.5 billion without government guarantee for the Tema Port expansion project.

b) The Ghana Airport company used a similar finance mechanism to raise about $300 million for the famous KIA Terminal 3 and other projects because their balance sheet was significantly enhanced by our decision to cede to them 100% of their IGF- a decision the NPP has reversed since 2017.

C) The $500 million Ameri Power Plant is another one of such innovative financing arrangements (BOOT).

7. We also have the track-record of having the ingenuity to set up the Ghana Infrastructure Investment Fund (GIIF)- a major mechanism to enable us to raise global financing for major infrastructure to transform the country without further burdening the tax payer.

* We had the creativity to set up the Ghana EXIM bank with a view of turning us into an export competitive economy- the same bank which the NPP is using to partly finance their so called 1D1F without giving credit to President Mahama who established it.

* The GETFUND is yet another example of our ability to think outside the box and create financing mechanisms for productive infrastructure developments.

So, the NDC has done it before and can do it again when given the opportunity.

8. To achieve this, we shall cancel the obnoxious capping and realignment policy so as to improve the financials of state-owned enterprises and parastatals so they are able to undertake strategic infrastructure and development projects.

9. Finally we shall resolutely protect the revenues and royalties of our dear country by:

i) stopping corrupt schemes like the Agyapa deal.
ii) reducing the number of ministries and the number of ministers- the record 125 Ministers and over 1000 Presidential Staffers will be reduced significantly and the savings channeled into productive initiatives for the benefit of all Ghanaians and not a select view.

iii) cut down profligate and wasteful expenditures, such as currently pertains at the Office of Government Machinery.

Iv) by waging a brutal war against corruption through Operation Sting to save the billions the country is currently loosing through graft and at the detriment of our development.

These are but a few of the far-reaching and far-sighted means that the next NDC/Mahama government will adopt to generate and properly utilize our resources in pursuit of our bold and transformational agenda.

We have done it before, and we know how to do it. John Mahama and the NDC has the track record and can therefore be trusted to deliver again.

Arrest warrant issued for 10 recalcitrant motorists who snub...
40 minutes ago