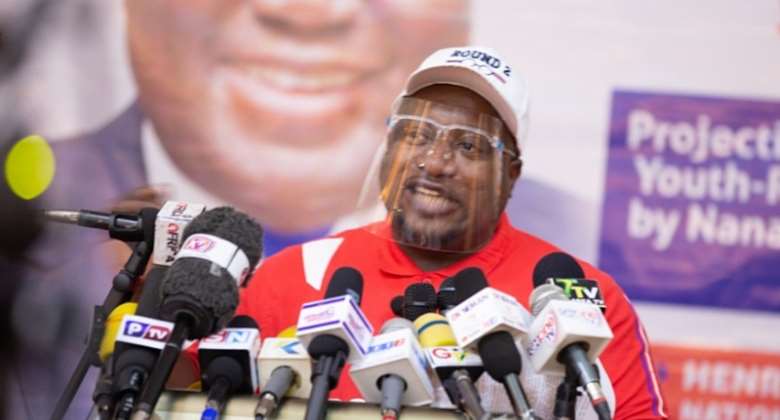 The National Youth Organiser of the governing New Patriotic Party (NPP) says the recently launched manifesto of the opposition National Democratic Congress is full of “unrealistic, populist and discredited promises.”

Addressing the press in Accra today, Thursday, September 10, 2020, Henry Nana Boakye said: “Our verdict is that the NDC’s 2020 manifesto is simply a document full of unrealistic populist and discredited promises disguised as the people’s manifesto when in fact it is not.”

“The vast majority is either stolen ideas, repetition of existing or ongoing projects by the NPP, deceptive and unreliable policies and recycled failed promises of their 2012 manifesto such as the promise to pay Assembly Members were repackaged into their 2020 manifesto.”

He further said the flagbearer of the NDC, John Mahama and the NDC cannot be trusted to manage the affairs of the nation creditably well.

“Mahama cannot be trusted and Ghanaians should not waste their time on him,” he insisted.

NDC has nothing to offer Ghanaians with 'empty manifesto'

The National Chairman NPP, Freddie Blay has already described the NDC’s manifesto as empty and unconvincing.

Mr. Blay says the promises in the NDC manifesto are unrealistic and a ploy to lure unsuspecting Ghanaians to vote for them in the December polls.

“If you look critically at the NDC manifesto, it is empty, a rehash of old promises in their manifestos of 2008, 2012 and 2016. It does not reflect the reality on the ground.”

He added that “we can't trust John Mahama and the NDC. They plunged this country into darkness for four years. We endured dumsor and it was God's grace that Nana Akufo-Addo and the NPP came to rescue Ghanaians. This same John Mahama was President when nurses and teacher trainee allowances were scrapped, today it has been restored. What shows that he will not cancel it if he comes back'?” Freddie Blay asked.