By Gavin Evans - The Conversation 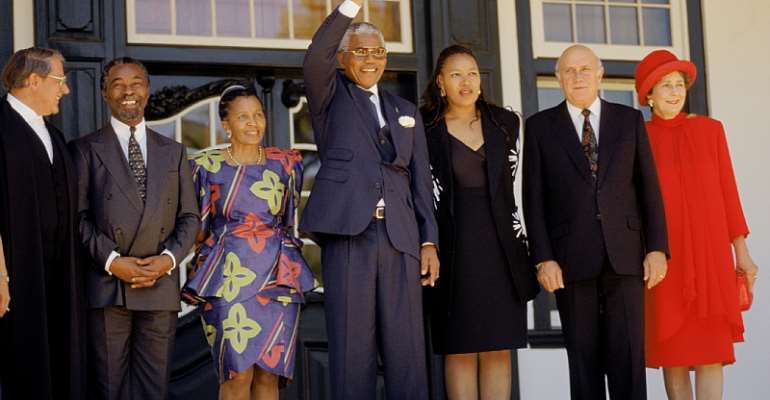 Twenty years ago the South African academic Jan-Ad Stemmet met the apartheid era justice minister Kobie Coetsee , who announced he had transcripts of 13,000 pages of recordings of Nelson Mandela's time in prison.

These transcripts of the anti-apartheid struggle icon contained, he said, “bombs, atom bombs” that would

The pair began to discuss a book deal but only two days in the 69-year-old Coetsee died of a heart attack and the moment passed. Then, 14 years on, this trove of documents reemerged in an archive at the University of the Free State , where Stemmet taught history.

Stemmet worked with the veteran South African journalist Riaan de Villiers to piece together the transcripts of recordings made in the final five years preceding Mandela's release on 11 February 1990 – a period of intense revolt against the apartheid regime, in which the black townships were rendered “ungovernable” and a low level civil war erupted .

Mandela and his seven comrades had been sentenced to life for sabotage at the end of the Rivonia trial (1963-1964). In line with apartheid policies all, except Denis Goldberg , who was white, were sent to Robben Island , where black political prisoners were kept.

From the account of the secret prison recordings documented, Coetsee emerges as a key player in this period of South African history. The small, enigmatic and inscrutable lawyer by training was a far-sighted plotter who sometimes spoke in riddles and held his cards close to his chest.

Coetsee bugged Mandela's prison conversations, which were also separately bugged by the National Intelligence Service. He seems to have used the knowledge and power this provided to help steer his own government in the direction of negotiations with the ANC.

As early as 1984, as justice minister, he suggested Mandela's unconditional release, and helped persuade the bellicose Prime Minister PW Botha of the value of dialogue with “Prisoner 913”. Years later he helped frame FW de Klerk's historic speech to parliament that announced the unbanning of the ANC and other political organisations.

De Villiers and Stemmet's book, Prisoner 913: Revelations from the Kobie Coetsee Archive , offers a detailed look at Mandela's talks with representatives of the apartheid government while he was in prison. It does indeed contain revelations that might be surprising, but no “atom bombs”.

What it does offer is valuable insight into Mandela's extraordinary role in guiding the future of his country while still in prison, with the gnome-like Coetsee playing a key supporting role.

Prelude to talks to end apartheid

Shortly after being separated from his fellow prisoners at Pollsmoor – Walter Sisulu, Ahmed Kathrada, Raymond Mhlaba, Elias Motsoaledi and Andrew Mlangeni – in 1985, Mandela began talking to government representatives. This he only revealed to the others after his initial meeting with Coetsee that year. The book notes that Mhlaba and Mlangeni were enthusiastic; Sisulu and Kathrada less so.

Mandela saw his role as a facilitator between the government and the ANC. He even proposed to Coetsee that the two of them go together to Lusaka to speak to the exiled ANC, an idea that fizzled out. Later Mandela considered an invitation from De Klerk to serve as a member of a “group of wise men” who'd advise him, but this too was dropped.

When Sisulu and seven others were released in 1989 Coetsee and Mandela agreed the ANC should not “fuel further conflict”. He was particularly keen that the ANC tone down its “armed struggle” rhetoric. He spoke on a prison phone to Thabo Mbeki , who was then the movement's publicity director. Mbeki read to him an ANC statement but conveniently left out the bit where they called for armed struggled to be intensified. Mandela later discovered this and was peeved, saying Mbeki had “made a mistake”.

In a January 1990 memo for the cabinet, Coetsee summarised Mandela's dilemma.

His separate detention in relatively comfortable conditions created a situation in which his colleagues became irritable and even distrustful towards him, especially when it became known that he was holding discussions with ministers and senior officials.

Coetsee suggested this was his side's aim, saying it was “subtly exploited” but conceded it failed because

Mandela sought throughout to prevent a wedge being driven between him and his organisation, or even that such perceptions should develop and take root.

One example is negotiation strategy.

Mandela proposed a two-stage model: first the government and ANC would work out preconditions; then the actual negotiations would begin. However, when the ANC adopted a different approach, calling on the government first to create a “climate for negotiations”, Mandela went along with this.

Gradually, the initiative shifted away from Coetsee and towards Prisoner 913, who made the key decisions with the government responding, right down to the timing and modalities of his own release.

A view on Winnie Mandela

Some of the most intriguing passages relate to Winnie Mandela. A document covering a conversation with his elder daughter Zenani and her husband, Swazi Prince Muzi Dlamini, is particularly revealing. Nelson wanted their younger daughter, Zindzi, to join her sister at the University of Boston because he was worried about Winnie's “corrupting influence”, with the prison note taker recording him saying she had

no respect for the community, the family or himself and also not for herself.

The note taker summarised Mandela's remarks on the early years of their marriage when Winnie “went around with married men” and “had relationships with other men”. Once, when in hiding, he told her he was going to Durban and was arrested and it was clear the police knew he was there and that Winnie was the source of this information.

She had told this to someone with whom she was having an intimate relationship who betrayed him.

The writers suggest that justice minister Coetsee, not wanting to unsettle their talks, ensured Winnie faced lesser charges in the case of Stompie Seipei (the 14-year-old murdered in her care). She was charged with kidnapping and assault rather than murder.

Importance of the book

Along the way the documents bring out historical nuggets that the authors don't elaborate on. For example, it is clear that “unrest” and sanctions are the backdrop for the concessions made by the apartheid government, with Coetsee confiding in Mandela that

the government is under intense economic and financial pressure.

It is also clear that the claim by some analysts that it was the fall of communism that prompted moves towards negotiations to end apartheid and secure majority rule is off the mark. The talks momentum started in 1984. By the late 1980s the decision to release Mandela unconditionally had been taken, with the release of Govan Mbeki in 1987 and then Sisulu and seven others seen as trial runs. All of this happened before the fall of the Berlin wall in November 1989 .

The book adds to the picture painted in Mandela's memoir Long Walk to Freedom , sometimes contradicting it in minor details. Now and then Mandela miscalculated but it is clear that without his vision, poise and self-confidence, history might have taken a less promising turn.

Prisoner 913 is a book more for scholars and those with a passion for the South African “struggle” than for general readers. The “913” in the title comes from Mandela's general prison number, which was used in all the transcripts. His number on Robben Island was famously 46664 .

Gavin Evans does not work for, consult, own shares in or receive funding from any company or organization that would benefit from this article, and has disclosed no relevant affiliations beyond their academic appointment.