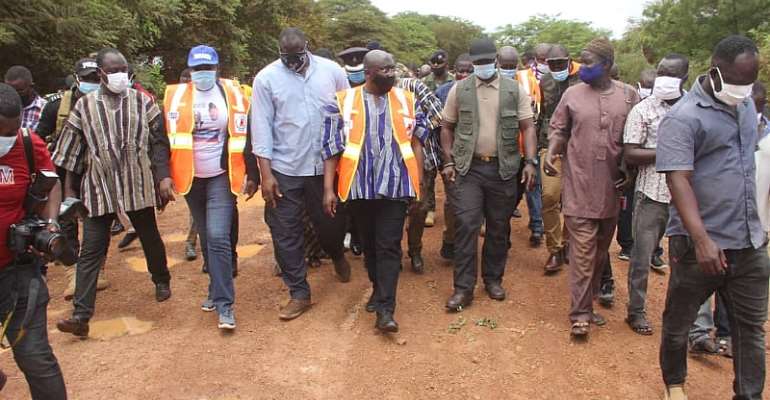 Vice President Dr Mahamudu Bawumia has visited the cut off bridge at Kobore in the Bawku West District of Upper East Region.

At a tour with his officials at the affected bridge and farmlands, the vice president described the disaster as a combined one coupled with heavy rains and the spillage of Bagre and Kopeinga dams.

According to the vice president, the spillage of the Bagre dam in previous years valves of the spillage used to be 8 million gallons which they used to control but now the Burkinabes authorities has increased it to 29million gallons that has worsened and resulted in the loss of lives and properties.

The vice president said the road, Bolgatanga Bawku Pulmakom road was under construction and that consultation are done with the contractor and as when the water recedes, the road will be immediately fixed for commuters and travellers to cross.

He said the flood is a problem across the northern zoon where four persons had died in Upper East and six in North East Region and almost every farmers along the White Volta has also virtually lost their farm produce to the flood waters.

He assured farmers that government will support them soon with relief items for their survival.

Dr Mahamudu Bawumia said government has procured a land for construction of Pwalugu multipurpose dam at Talensi district of the Upper East Region.

According to him, contractors are on site waiting for the rains and the flood water to recedes before they begin work which will go a long way to solve the ritual spillage.

The spillage of bagre and Kompienga dams have affected over seven thousand residents of Bawku Municipal, Binduri, Garu, Pusiga and Tempane districts in the Upper East Region.

They have been cut off from Zebilla in the Bawku West District, Bolga and other districts of the region due to the spillage of Bagre and Kompienga coupled with continued torrential rains.

Most Passengers and drivers coming from Accra, Tamale, Bolga are stranded at Zebilla in the Bawku West district and others also coming from the other side, thus, Bawku Municipal, Garu, Pusiga, Tempane and other neighbouring countries such as Togo, Burkina Faso, Mali, Niger are also stranded at Bazua in the Binduri district close to the white volta in the past three days ago.

Even though, other passenger buses have taken an alternative route plying from Bolga to Walewale to Lamgbuisse to Gambaga to Nalerigu to Nakpanduri to Garu and to Bawku at a fare of Ghc70 to Ghc80 per passenger which used to be Ghc6.00 per passenger to Bawku.

Your MMDCE list plagued by inequalities entrenched in the du...
18 minutes ago

Chereponi: 12 arrested after vandalising properties over nom...
43 minutes ago