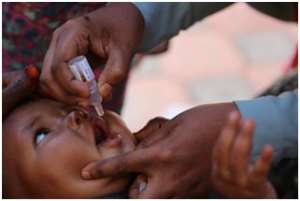 Some 380,000 children in all 18 districts of the Volta region are expected to be immunized against the deadly polio disease in a sub-national mass campaign.

The mass immunisation campaign, targeted at children from zero to five (0-5) years will continue in a second phase scheduled for Thursday, October 8 to Sunday, October 11, 2020.

The Ministry of Health through the Ghana Health Service and partners is expected to ensure the immunisation of about 4.5million children in 179 districts across the country under the polio immunisation campaign.

The Deputy Volta Regional Director of Health Services in Charge of Public Health, Dr. Senanu Kwesi Djokoto, stressed that sustaining the eradication of Polio from the country was non-negotiable, hence “It is a must for every child to take the vaccines whether he or she has received vaccination during routine immunization or not. The additional doses are not harmful; it is rather beneficial to the entire population.”

According to him, although the region was yet to record a polio case since last year's outbreak of 31 cases in 11 out of the 16 regions of the country, it was still essential to vaccinate children in the region because, “As long as a single child remains infected, children in all countries (including Ghana and Volta Region) are at risk of contracting polio.”

He therefore called on all and sundry, particularly the media and other partners to work together to ensure a successful immunisation. “Let us all be part of the advocacy initiative to keep all our children, safe, sound, strong and free from polio. We can realize this objective only if all the children from 0-5years are vaccinated.”

Ghana was declared polio-free in 2015, after seven years without recording any case.

However, samples from environmental surveillance recorded events of polio at Koblimagu in Tamale Metropolis (Northern Region) and Agbogbloshie in Accra Metropolis (Greater Accra Region) in July and August 2019 respectively.

This was followed by a first human case in August 2019 and other subsequent cases, increasing the tally to 31.

The development has been linked to an ongoing outbreak in the West African sub region.

It is for this reason that the country has stepped up the immunisation campaign.