Kufuor at UN Pays tribute to Kofi Annan and promises him a heroe`s welcome...... 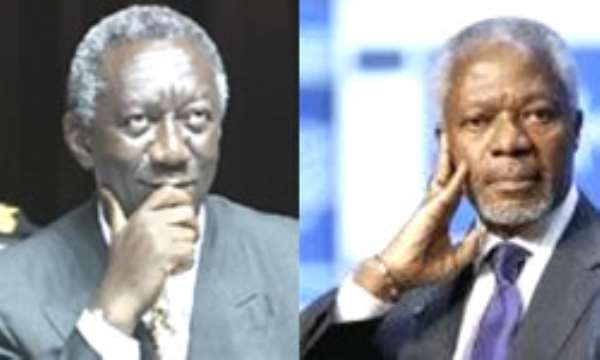 President Kufuor has declared that "freed from intimidating legislation", Ghana's media "have blossomed into a vibrant watchdog for the probity and accountability expected of the governors, and the responsibility expected of citizens."

The President was participating in the General Debate of the 61st Ordinary Session of the UN General Assembly in New York yesterday.

Giving a general overview of Ghana's achievements, he said, "It is against this background that Ghana readily submitted herself to the African Peer Review Mechanism (APRM) under the New Partnership for Africa's Development (NEPAD) to have an objective assessment of her institutional structures for the improvement of her governance."

On the UN itself, the President said Ghana "acknowledged that peace, security and development and human rights were the pillars of the United Nations system and the foundations of our collective well-being."

These pillars, he said are "interlinked and mutually reinforcing, and that while each country had the primary responsibility for its own development, their individual efforts should be complemented by supportive global programmes, measures and politics aimed at expanding development opportunities especially for developing countries"

Ghana, he told the General Assembly, attaches the utmost importance to last year's "Summit's decision that developing countries should adopt and begin to implement by 2006, such requisite national strategies as would enable them achieve the goals and objectives agreed upon, including the Millennium Development Goals (MDGs)."

The objective to alleviate the economic plight of the majority of mankind, he said, "may continue to elude us unless the pursuit of international peace and security is effectively and satisfactorily addressed."

Ghana, the President explained views "with great concern the continuing spread and persistence of terrorist activities."

The President mentioned the scourge of nuclear weapons and told the world body that it "must continue with and intensify its pressure for the total elimination of these weapons. For as long as 27,000 nuclear weapons continue to exist, as they do now, our world will remain vulnerable to the threat of mass destruction."

The wide ranging speech touched on nuclear energy, small arms and light weapons (SALW) which he said was a scourge, especially for Africa, UN Peacekeeping Missions of which Ghana "has been a dedicated and regular contributor", conflict management and resolution, the establishment of the UN Human Rights Council and the reform of the UN Security Council."

He used the last portion of his address to honour his compatriot, the outgoing UN Secretary General, Kofi Annan, whose tenure ends this December.

In a tribute, the President said of his countryman: "He has brought honour and distinction to our nation Ghana by his excellent stewardship of the UN over the past 10 years...Indeed, his entire adult career over the past 40 years has been at the exclusive service of this Organization through whose ranks he rose till he attained the pinnacle 10 years ago..."

Mr. Annan's tenure, the President said "witnessed the phenomenal acceleration of the world in the process towards globalization."

Of Kofi Annan's diplomatic skills, President Kufuor said "He can claim some credit for having suceeded in shepherding deftly our Organization through the complicated and transformational challenges that the times confronted it with. He has been able to give this masterful leadership not only through competent administration, but also, in ideas, as well as lofty humanistic ideals."

In a paean, President Kufuor said of his illustrious countryman: "he is a much decorated personality all over the world, and his winning the Nobel Prize for Peace especially attests to the quality of human being he is.

There is no doubt that he retires with an enviable legacy of contributing immensely to shaping the destiny of this organization and the affairs of the world. Ghana is proud of him and looks forward to receiving him heroically at home. I say to him in our language "Ayeekoo" meaning well done!

President Kufuor will this evening organize a major reception for Mr. Annan at which many heads of state, and other important persons in politics, diplomacy, commerce, industry and the media would be represented.