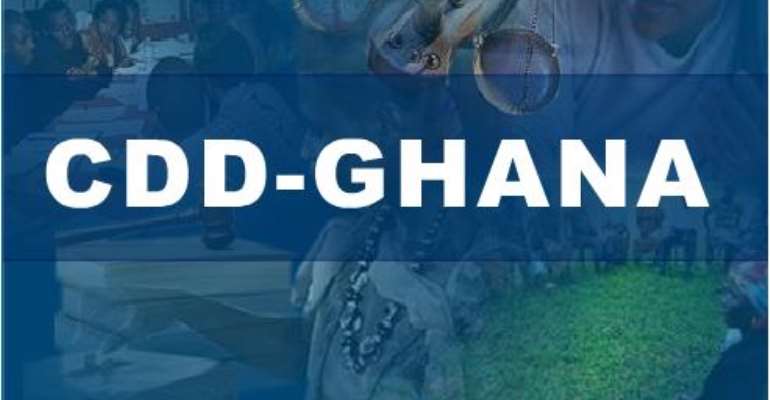 The Ghana Centre for Democratic Development (CDD) on Tuesday called on the Electoral Commission (EC) to adopt clear guidelines on partisanship in the District Level Elections.

“Even though partisan influence is not visibly widespread, the few instances of political party interference are worrying. In order to maintain the non-partisan flavour of the local election, the Centre recommends the adoption of clear guidelines on what constitutes partisan influence,” It said in a statement issued in Accra.

The statement signed by Mr John Larvie, Senior Programmes Officer of G-CDD also recommended that the EC and National Commission for Civic Education (NCCE) should intensify their civic education programmes aimed at minimizing the antagonism that characterized electoral campaigns in the country.

However, it commended the two institutions for good work done in its third report on the pre-election environment on the September 26, District Level Elections. The report compiled by G-CDD monitors nation-wide covered mounting of platforms by the EC and other related issues.

It said mounting of the platforms had demonstrated a marked improvement in civic education and awareness creation towards electoral activities.

“Candidates have demonstrated enthusiasm and keen political competitiveness on the campaign platforms. The electorates also patronized the platforms to query the candidates on their plans when elected,” It added.

The report commended the EC moderators for the professional competence with which they handled proceedings of the platforms and the sustained civic education.

Women and those with disabilities also had equal opportunities to present their programmes to the electorates.

The report said generally the EC sponsored and moderated the platforms very well, however, reports indicated that in some electoral areas candidates had to support the EC with financial and other resources such as public address systems, tables and chairs to ensure that the events did not fail.

It said some non-governmental organisations such as Ibis and GAIT sponsored the platforms in selected districts to promote the candidature of women and persons with disabilities. “Some local FM radio stations in Tamale also organised panel discussion programmes for women candidates, “ It added.

The report said patronage of the platforms was poor at the beginning of the exercise with monitors reporting an average audience of only 30 people.

It said interest and enthusiasm however, picked up among both the electorates and candidates later when the platforms recorded between 200 and 400 audiences.

Turnout was heaviest in parts of Ashanti, Upper East and Greater Accra regions.