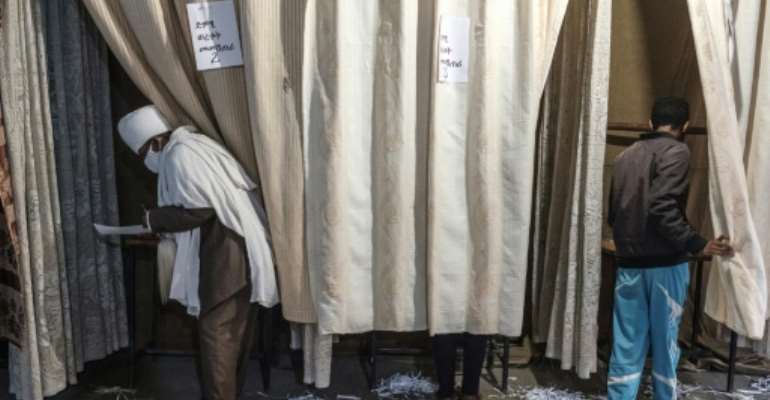 Voting proceeded peacefully Wednesday, and the election commission has reported turnout of greater than 97 percent. By EDUARDO SOTERAS (AFP)

The ruling Tigray People's Liberation Front (TPLF) has touted the polls as evidence of its democratic credentials while accusing Abiy, winner of last year's Nobel Peace Prize, of running roughshod over institutions in an attempt to consolidate power.

But it was unclear whether opposition parties would actually gain seats in the regional parliament -- known as the State Council -- against the TPLF, which has dominated Tigrayan politics for decades.

"I am worried we may end up with having 100 percent TPLF in the council, but let's wait and see," said Girmay Berhe, head of the Tigray Independence Party.

"I don't see significant change in the political culture. The TPLF will dominate the council and will probably get 98 or 99 percent of the seats," said Hayalu Godefay, chairman of opposition party Salsay Woyane Tigray.

Ethiopia was supposed to hold national elections in August, but the national poll body announced in March they would need to be postponed because of the pandemic.

However leaders in the once-powerful Tigray region rejected the extension of mandates -- which would have expired in October -- contending Abiy will have no legitimacy after that.

Their decision to hold their own elections this week has rankled federal officials, who have said they have "no legal basis" and are "null and void".

The regions of Ethiopia. By Simon MALFATTO (AFP)

Voting proceeded peacefully Wednesday, and the election commission has reported turnout of greater than 97 percent.

Preliminary results could be released as soon as Thursday evening but are more likely to come out Friday.

The TPLF led the armed struggle to topple the brutal Derg regime in 1991 and went on to control the governing coalition that took over.

Though the party has been sidelined under Abiy -- who came to power in 2018 on the strength of years of anti-government protests -- it remains in command in Tigray, whose people make up six percent of Ethiopia's population of 110 million.

Election commissioner Muluwork Kidanemariam said Thursday it was too soon to identify general trends in the results but suggested he would not be surprised if the TPLF won handily.

"The incumbent is very strong," he said. "This has been established before."