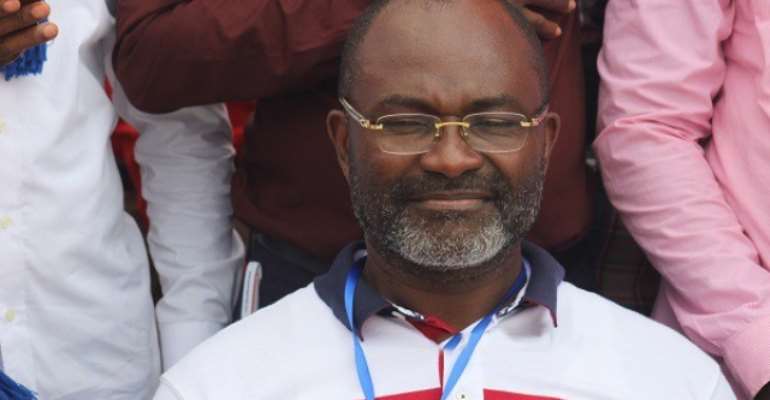 The Chief Justice, Kwasi Anin-Yeboah, has been petitioned to take action against the Member of Parliament for Assin Central, Kennedy Agyapong, for alleged threats he made against the judiciary.

The petition was written by one, Sulemana Issifu, who described Mr. Agyapong’s conduct as “monumental impunity against the courts.”

He is demanding strong action against Mr. Agyapong “to establish the independence and authority of the courts and to deter persons in future from acting in an analogous manner.”

The MP is alleged to have threatened a sitting judge he claims had issued an interlocutory injunction against him in a land dispute case.

“The unfortunate and highly dangerous actions of Mr Agyapong happened on his Net 2 TV while appearing on a show dubbed “The Seat” hosted by one, Kweku Annan,” the petition indicated.

Sulemana Issifu maintains the MP’s alleged threat “puts the sitting judge's life in harm's way because revulsion towards the judge may have occasioned amongst the teeming supporters of Mr Agyapong.”

“I therefore beforehand request you, respectfully, to take immediate steps to secure the life of the judge,” he added.

The petitioner referenced the ‘Montie Three’ case where some political commentators and radio show host were jailed for contempt of court after they threatened the lives of some Justices of the Supreme Court in 2016.

Sulemana Issifu also asked for clarity from the Chief Justice on claims that the judges implicated in the 2015 exposé by investigative journalist Anas Aremeyaw Anas had had their licences restored. Find below the petition

PETITION: TAKE ACTION AGAINST KENNEDY AGYAPONG, HONOURABLE MEMBER OF PARLIAMENT, ASSIN CENTRAL FOR HIS THREATS AGAINST THE JUDICIARY

Your Lordship, please have my highest regard and I hope this petition finds you well.

I wish to draw your attention to two issues that are of supreme national interest and may have grave consequences for our dear Republic if not expeditiously addressed. I do so, on account of the constitutional imperative that obliges all citizens to at all times safeguard the constitution of Ghana and by extension, the creatures of the constitution including the judiciary, which you are head of. As the head of this important state institution, it is my contention, that, due to the severity of the issues at hand, it should be brought to your attention for action. My trepidation is premised on the unfortunate historical antecedent, which your good self may be much familiar with than me, where judges were murdered in cold blood while exercising their duties. Thereafter, other incidences including the storming and ransacking of Kumasi High Court by thugs, 'Montie 3', etc have occurred and I offer to assist to stop this monumental impunity against the courts.

I have seen a video and authenticated same to be original, in which, the honourable member of parliament for Assin Central, Mr Kennedy Agyapong, amidst unsavoury comments (which out of respect for Your Lordship, I am unable to repeat but are contained in the attached video and transcripts) about a sitting judge and the entire judiciary, threatens to deal ruthlessly with a judge whom, Mr Agyapong claims, had issued an interlocutory injunction against him in land dispute case (Emmanuel Mompi, Iris Mompi, Mr Eric Afotey Odai versus Hon. Knennedy Ohene Agyapong with case reference number LD/1028/20). The unfortunate and highly dangerous actions of Mr Agyapong happened on his Net 2 TV while appearing on a show dubbed “The Seat” hosted by one, Kweku Annan. I have attached a copy of the video and transcripts of his comments to this petition for your perusal.

First, his outburst puts the sitting judge's life in harm's way because revulsion towards the judge may have occasioned amongst the teeming supporters of Mr Agyapong. I therefore beforehand, request you respectfully, to take immediate steps to secure the life of the judge. Your Lordship, if this matter is not addressed, I am afraid it may spur on political actors to use their influence to cower the judiciary into submission and insulate politicians from the law. This would engender hate and weaken the standing of the judiciary and cast it as a 'white elephant' in the eyes of many ordinary Ghanaians. Further, it would mean that ordinary people cannot seek justice from the courts against persons of Mr Agyapong's stature and breed a culture of lawlessness amongst the populace.

An important point for your attention, Your Lordship, is that, looking at Mr Agyapong's standing in our society as a legislator and an influential political actors, he ought to have known available remedies to him should he feel dissatisfied by a court's ruling. Indeed I hold that, Mr Agyapong would have been fully aware of the laid down legal remedies available to him, as same may have been communicated to him by his counsel, but opted to use his influence to sway the public to his direction and to ingrain in the minds of his teeming supporters, his authority over the courts. It is my respectful view, and I hold same to be true per the contents of the video, that, he set out to desecrate the courts in a contemptuously bizarre fashion.

I further hold, Your Lordship, that, Mr Agyapong's conduct is graver in scope and impact than the infamous 'Montie 3'. This is because of the influence he wields and the coverage of the channel on which he made these dangerous comments compared to the 'Montie 3' in these respects. A strong action against Mr Agyapong is necessary to establish the independence and authority of the courts and to deter persons in future from acting in an analogous manner. Such an action will instil in the people, confidence in – and the requisite support for – the judiciary.

Your Lordship, in another video of Mr Agyapong which was shot on the same “The Seat” show, he, together with the host, created an impression and indeed communicated succinctly to the public that, you, Justice Annin Yeboah, the Chief Justice of the Republic, had restored the 'licenses' and 'certificates' of all judges who were busted in the judicial scandal produced by, investigative journalist, Anas Aremeyaw Anas.

Respectfully, I seek the following information as part of my right to information under the constitution and RTI Act of Parliament, and request same to be communicated to me in writing –

I have attached a copy of the said video and transcripts for your perusal.

Please, be rest assured, that, though I am currently not in the Ghanaian jurisdiction, should your office require of me to assist in unpacking the issues raised herein, I shall avail myself to assist if given enough notice time. Kindly use the correspondence provided in the address section in case of reply.

Accept my best wishes. Thank you.

President of the Republic of Ghana

Vice President of the Republic of Ghana

Association of Magistrates and Judges