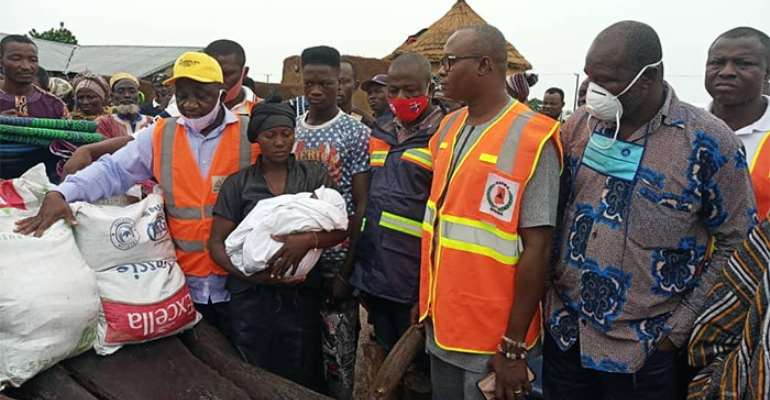 A victim with her relief items

The National Dissaster Management Organisation (NADMO) has distributed relief items to victims of the Bagre dam spillage and floods in the North East Region.

The items include bags of rice, blankets, plastic buckets, mattresses, mosquito nets among others.

The heavy downpour and resultant floods in addition to the spillage of the Bagre dam have destroyed over 30 acres of farm lands and displaced hundreds of residents in the North East Region.

Communities have been cut off due to blockage of roads which link them to the various districts of the North East Region.

So far, six persons have been confirmed dead in the North East Region.

The spillage of the Bagre dam was caused by the 81 per cent increment in the water level.

Addressing journalists during a tour of some of the affected communities, the North East Regional Minister, Solomon Boar, said he wished the Pwalugu multi-purpose dam would be completed as soon as possible to solve the flood situation in the region.

The Pwalugu Multi-Purpose Dam project after completion is expected to store water for hydropower, for downstream irrigation and for flood protection for people living in the White Volta Basin.

According to the minister, the Kpasenkpe to Yagaba road has been awarded to a contractor to commence work to tackle the poor road situation in the Yagaba/Mogdori district.

Mr. Boar appealed to the affected residents living close to the bank of the Black and White Volta to relocate to safe grounds.

We shall not entertain immorality in our community — Zongo J...
2 minutes ago