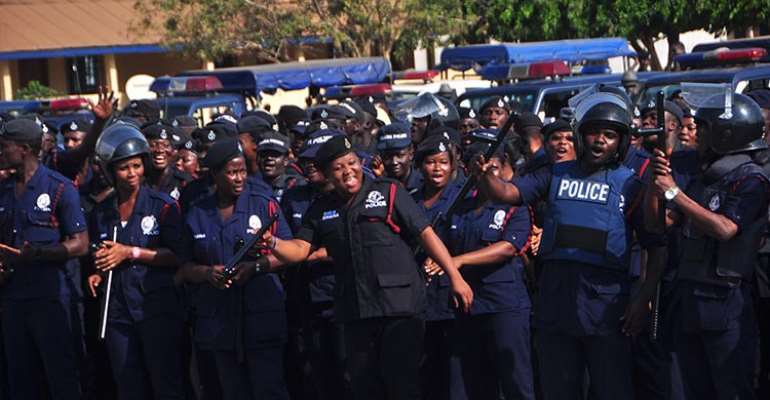 The times are dire for the image of the Ghana Police Service (GPS) as a loose National Democratic Congress (NDC) canon, a former Senior Police Officer, is on the rampage, his target being the internal security department.

Peter Lanchene Toobu's mission is part of a complex NDC project having anointed him the party's security spokesperson.

Put the law enforcement system on the spot and blame it all on the New Patriotic Party (NPP). Sammy Gyamfi had already warned that their party would weed out those deemed to have been 'unprofessional' in the conduct of their work. How this would be determined is a matter of conjecture.

He has already hit the ground running with his baggage of diabolic agenda. Of course, he has a long list of persons he thinks must be dismissed or transferred should the NDC come to power.

It is instructive to note that the GPS passed through its telling moments when Peter Lanchene Toobu was secretary to the then IGP.

While holding the office of scribe to the chief of internal security management in the country, he was engaged in so many negative things against the GPS, of course, on the blind side of his boss.

It was unsurprising when the National Chairman of the NDC claimed that the opposition had officers in the GPS from whom important pieces of information were being garnered and upon whom the opposition could rely upon for its dirty operations against the state.

Today, Peter claims that the GPS he contributed in reducing to an appendage of the NDC somewhat is passing through its worst moments.

He has lost it. If indeed the GPS is such an unprofessional department of the state he, of course, and the person who overlooked his flirtation with the NDC even while he was in uniform under oath to serve the nation and not to let out secrets of the organization should be held responsible. Photocopied documents of the police now in the hands of the NDC passed through Peter yet he is talking so irresponsibly and with no touch of patriotism.

Peter is such a shame to himself and the GPS which added value to his life. No Senior Police Officer has exited the service and subjected the regimented organization to such opprobrium like Peter is doing. He has just started and will spill restricted stuff of the GPS. How sad!

He claims the GPS has lost confidence and trust of the people and this, he added, is something an NDC government will reverse. If this is not arrant nonsense, we do not know what else is.

Having governed this country the longest in Ghana's post-independence history, the P(NDC) and now the NDC is responsible for the morass of lost public confidence in state institutions, including what the police have suffered.

We are not oblivious to the so-called PDCs created in the police under the PNDC, something which morphed into a situation which allowed the likes of Peter to be commissioned into the law enforcement system to do politics rather than policing.

Now we know why the police had to suffer the decay it did over the years. This decay which is being addressed by the new crop of police officers who are apolitical would take time to achieve. But with characters such as Peter out of uniform we can rest assure that it would not be long before the contaminants he left behind under the aegis of the NDC are completely cleared.

This is a guy who resigned from the service and went straight to pick NDC nomination forms to contest as the party parliamentary candidate in the Upper West Region. We all know that to become parliamentary candidate for any of the major parties you must have been in good standing for at least five years. This guy was clearly into active politics whilst serving as a police officer and is now turning around to complain about unprofessionalism in the service.

Public confidence in the GPS could not have been steady with senior police officers like him attending NDC cell meetings with his boss not taking notice.

President Akufo-Addo is committed to rectifying the anomalies created by the NDC's many years at the helm.

The negative traits of the opposition NDC is infectious. Those who join the fold tend to immediately begin to behave like their leader who can foretell when his opponents would die and showing unbridled instances of inconsistencies.

Is Peter really the security spokesperson of the NDC? Blimey this is awful!