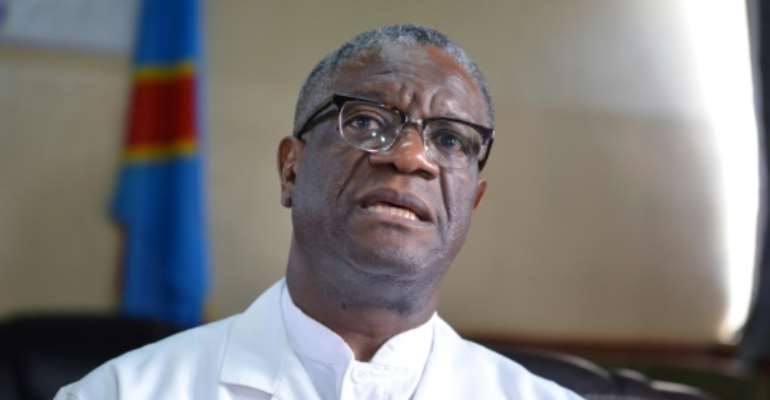 Nobel peace laureate Denis Mukwege was again under the guard of United Nations security forces in DR Congo after death threats against him prompted protests and international calls for his protection.

Mukwege, a gynaecologist who shared the 2018 Nobel Prize for his work against sexual violence in war, said in July he had been threatened after he condemned a massacre in the country's strife-torn eastern region.

The doctor has been living at the Panzi hospital near Bukavu, which cares for women raped in the surrounding province, since he survived an attack at his home in 2012 in which a security guard was killed.

UN police officers had left the site in May but were re-deployed to the hospital, Mukwege's communications manager said, adding there had been "zero protection" until Wednesday morning.

"We welcome the redeployment of elements from #MONUSCO to #Panzi this morning to ensure the safety of our patients and staff. Thank you to the #UN for ensuring our protection," Mukwege tweeted.

A spokesman for MONUSCO, the UN mission deployed in DR Congo, confirmed to AFP that the security detail had previously been stood down.

"The police officers who were directly assigned to securing the Panzi clinic had to be withdrawn due to Covid cases," the spokesman said.

There have been renewed fears for Mukwege's safety after he and his relatives were threatened following a tweet in which he condemned the massacre of 18 people in South Kivu province.

Several hundred people marched in Bukavu last week to call for his protection -- including women he treated -- as well as in the capital Kinshasa.

Amnesty International on Friday called on the government and the UN to "take urgent and concrete measures to protect Denis Mukwege".

On the same day, UN rights chief Michelle Bachelet said "his life seems to be at serious risk".

Stephane Dujarric, a spokesman for UN chief Antonio Guterres, told the media this week that "we have continued to work closely with Dr Mukwege and the Congolese authorities".

"The personal security of Congolese personalities is a responsibility of the national authorities, but the peacekeeping mission is providing all possible support within its limited means."

In addition to his work as a gynaecologist, Mukwege, 65, has been campaigning for punishment of rights abuses committed during the two Congo Wars, of 1996-98 and 1998-2003, whose aftermath still afflicts the east of the country today.

I lied that you contracted covid-19, you didn’t also chop co...
37 minutes ago