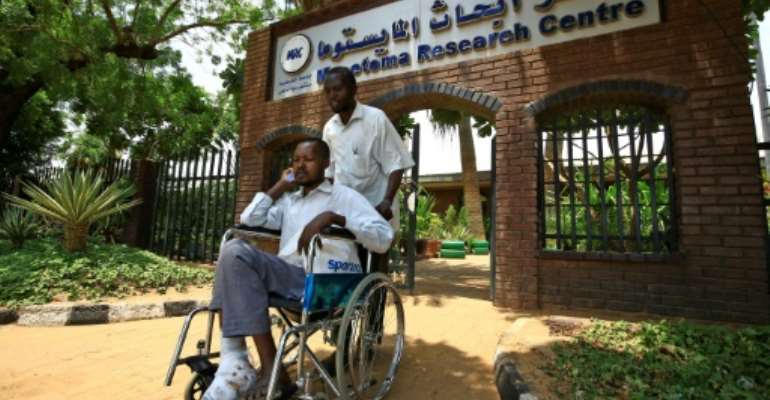 Mycetoma, caused by bacteria or fungus and entering the body usually through cuts, it is progressively destructive infectious disease of the body tissue, affecting skin, muscle and boneÂ . By ASHRAF SHAZLY (AFP)

It seemed little to worry about: Sudanese farmer Khadija Ahmad was planting onions when she stepped on a thorn that pierced her sandal and cut her foot.

But the thorn brought with it a flesh-eating infection, a bacterial and fungal disease called mycetoma, which rips through the body causing severe deformities.

For Ahmad, a 45-year-old from El-Fasher in western Sudan's war-ravaged Darfur region, the first she knew something was wrong was when her foot swelled.

"At first I didn't have any pain, just a lump," she said. "We thought it would pass."

Mycetoma, listed as a neglected tropical disease by the UN's World Health Organization (WHO), is all too common in Sudan.

Sudanese farmer Khadija Ahmadmad stood on a thorn that went through her sandal -- but it brought with it a flesh-eating infection called mycetoma. By ASHRAF SHAZLY (AFP)

"I waited nine years before coming," Ahmad said, as a doctor examined her at the Mycetoma Research Center (MRC) in the capital Khartoum.

"When I arrived, it was too late," she said, holding up her prosthetic leg in her arms. "It had to be amputated."

She now has to take medication for life.

Sudanese have another name for the disease; the "silent death".

While few cases are fatal, mycetoma destroys the lives of its victims.

Many infected are young farmers walking barefoot in the fields, the WHO says.

For workers depending on manual labour to survive, the crippling infections act as a life sentence.

Mycetoma, caused by bacteria or fungus and entering the body usually through cuts, is a progressively destructive infectious disease of the body tissue, affecting skin, muscle and even bone.

It is often characterised by swollen feet, but it can also cause grotesque barnacle-like growths and club-like hands.

Sudanese doctor Ahmad Hassan Fahal set up the Mycetoma Reseach Center in 1991 to help victims as well as look for a cure. By ASHRAF SHAZLY (AFP)

"The disease grows slowly and slyly inside the body over many years," said Ahmad Hassan Fahal, founder of the MRC clinic.

It can manifest itself anywhere on the body, not just where the entry cut was made.

"The organism goes inside the skin, and then it grows," Fahal said.

"Disability is very common; almost 60 percent of people who catch the disease end up with deformed limbs."

It thrives in the humid heat of tropical climates.

Sudan is particularly affected by mycetoma, but it is endemic in a geographical "belt" of some 40 countries ranging from neighbouring Ethiopia and Chad, to India, Mexico and Venezuela.

"In Sudan, we also call it the 'silent death', because it creates different problems -- disability, deformity and difficulties -- and it can kill the patient," Fahal said.

Since MRC was founded in 1991, it has treated 9,000 patients free of charge from all over Sudan.

For a fifth of those arriving at the centre, the only option left is amputation.

Yet those who reach the centre are "the lucky ones", Fahal said.

"Most of the people are in the villages in remote areas and cannot come here," he said. "They are the poorest of the poor."

Medics and scientists at Sudan's Mycetoma Research Center are carrying out research into a new drug hoped to tackle the crippling infection. By ASHRAF SHAZLY (AFP)

But MRC's focus is its cutting-edge laboratory, a unique global research centre dedicated to the disease.

In a treatment room, 22-year-old Walid Nour al-Dayem lies with his left foot wrapped in bandages.

"A year ago, I was cutting the wheat harvest when I stepped on a thorn," said Dayem, who comes from the farming village of Managil, in central Gezira state.

"At the time, I didn't feel much, but afterwards it got worse."

The local hospital told him to seek help at MRC.

"Now I am waiting for my fate to be decided," he said morosely.

Doctors took samples from Dayem's leg to see if his case is a bacterial or fungal infection, or both.

For mycetoma, either is possible, complicating MRC's long search for drugs.

Antibiotics help against bacterial infections, but not for fungal cases.

Many infected by mycetoma are young farmers or cattle herders, who often walk barefoot in the fields, according to the World Health Organization. By ASHRAF SHAZLY (AFP)

"The difficulty in finding a cure for this disease is because it is made of two different things, bacteria and fungus," Fahal said.

"So far, nobody has been able to create a medicine for the two together."

But researchers are working with Japanese and Swiss scientists on a new drug.

"Hopefully, next year or the year after, we will have a result," he said with a wide smile.

"If we succeed it would be a great first."