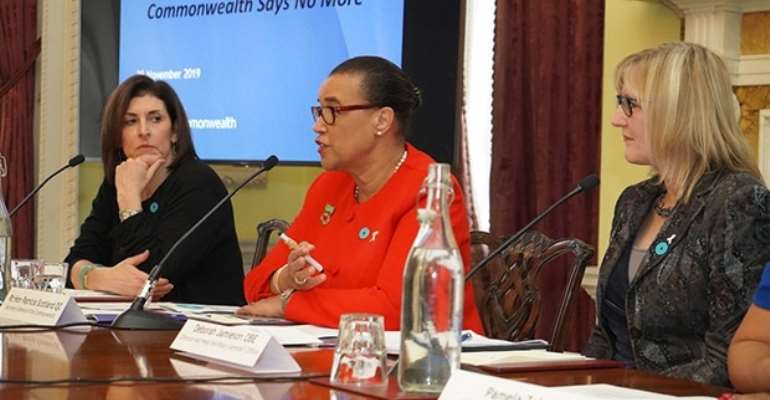 The Commonwealth Secretariat and NO MORE Foundation have launched a new campaign designed to help tackle the immediate crisis of the rapid increase in domestic and sexual violence due to the impacts of COVID-19, while also providing support for governments, organisations, and individuals to confront this issue through longer-term prevention strategies and support.

The launch was held today, at a special virtual event attended by representatives and advocates from across the Commonwealth and representing nearly one-third of the world’s population.

At the event, the partners unveiled the first pan-Commonwealth digital portal designed to support governments and civil society in identifying and implementing joint solutions while also providing individuals with concrete actions they can take to support both the campaign and those affected by domestic violence.

The new ‘Commonwealth Says NO MORE’ campaign is launched at a time when organisations across the globe have seen calls to hotlines for victims of abuse and demand for support services rise from between 25 and 300 per cent during COVID-19 lockdowns. Even before the pandemic, one in three women across the world are beaten or sexually abused within their lifetime, making it a leading cause of death in woman and girls.

As part of the initiative, leaders, celebrities and individuals globally are taking the ‘Commonwealth Says NO MORE’ pledge towards ending domestic and sexual violence. Ahead of the launch, many shared video messages endorsing the effort and encouraging other people across the 54 Commonwealth countries to get involved.

Commonwealth Secretary-General Patricia Scotland, speaking at the launch of the portal, said: “It is indisputable that while the virus will pass one day, for many women, the ever-present threat of violence will remain.

"COVID has emphatically exposed just how urgently we need a cure to flatten the rising curve of domestic and sexual violence. Business-as-usual is not an option. That is why we are announcing this first-of-its-kind portal, offering an impressive array of expert resources and tools to support concerted action by everyone from governments to private individuals. We must all use this opportunity to redouble our efforts to tackle and end this violence now.

In a video message, Ameenah Gurib-Fakim, former President of Mauritius, said: “Violence against women and girls is a pandemic that destroys lives, communities and economies. The protection of women and girls from domestic and sexual violence must be at the heart of the COVID-19 response and everything we do to create a safer, fairer and better world. We can and must do better now.”

Addressing the event, NO MORE Global Executive Director Pamela Zaballa said: “We are excited to take the NO MORE message throughout the Commonwealth. The portal is an important first step in bringing governments and civil society together to end domestic and sexual violence. If we can all commit to speaking out and taking action, we will be able to see real progress in a generation.”

Speaking in a video message to the conference, President of Kiribati, Taneti Maamau added: “COVID-19 measures imposed by governments around the world, further increase the risk for women as homes are no longer the safest place.

“We all have an important role to play. Let's stop the silence on violence and make every home a safe and peaceful land for all women and girls around the globe.”

Also contributing Amina J. Mohammed, Deputy Secretary-General of the United Nations, said: “Initiatives such as the Commonwealth New Portal, Commonwealth Says NO MORE, and the UN-EU spotlight initiative, provide a vehicle to prevent violence, provide services to victims, and accountability for those who perpetuate abuse.”

The digital portal provides easy-to-use tools and resources to help governments and community-based organisations strengthen their efforts to support victims of domestic and sexual violence and those at risk, and train communities in a culturally sensitive manner.

In addition, it also provides help to those affected by violence to understand and recognise violence and gives them one-stop access to information such as local hotlines, safety plans and legal guidance – a critical service for victims in places where such support is either not available online or is disrupted by the pandemic.

Joselyn Dumas said: “For far too long, we have been so quiet about violence against women, especially around this time during COVID. A lot of women have found themselves in very vulnerable situations with no one to talk to.

“Society tends to blame the woman a lot more than finding possible solutions to flatten the curve when it comes to domestic violence. So, I am proud to join the Commonwealth in saying NO MORE to violence against women.”

The virtual event was an opportunity for governments and community-based organisations to learn how the portal can support their efforts towards tackling violence and ultimately achieving the UN’s sustainable development goal for gender equality.

The ‘Commonwealth Says NO MORE’ digital portal is part of the partnership, which both organisations announced late last year.

The Commonwealth is a voluntary association of 54 independent and equal sovereign states. Our combined population is 2.4 billion, of which more than 60 percent is aged 29 or under.