Righting The Wrongs Of The Ancestors: Africa Washes The Feet Of Descendants Of African Slavery 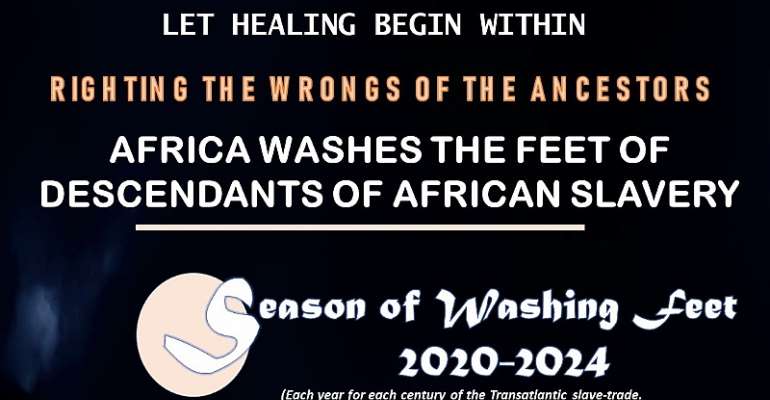 LET HEALING BEGIN WITHIN! Africa prays. Africa pleads. For many years. For many decades. For centuries.

Africa has a unique place in human history. If the Azusa Street Revival started by William J. Seymour(1906), an African-

The treachery in the character of infant Israel had to be dealt with in order to prepare her to possess the inheritance and the Promises, “Now don't you be stiff-necked, as your fathers were; but yield yourselves to Yahweh, and enter into his sanctuary, which he has sanctified forever, and serve Yahweh your God, that his fierce anger may turn away from you” (2 Chronicles 30:8). Until Israel understood that their future was vested together as one people, their progress was stalled. The treachery in Africa’s character must be dealt with to prepare her to repossess her possessions and position in God’s Last days agenda. Until Africa and her diaspora recognise that their future is vested together, the realization of her spiritual position and progress is stalled.

Ten brothers sold off one brother into slavery. They sacrificed an ungodly tithe to pacify their aggrieved ego and perceived threat to their inheritance and positions in infant Israel. They denied Joseph his birthright to the Promised Land. Their light attitude to this grim scheme, their thinking that it was their right to determine Joseph’s place in the family’s pecking order, the lies they invented to cover up their crime, and the calloused amnesia, all speak to Africa’s attitude to the slave trade.

It took God 400 years and some to deal with the treachery of betrayal in the character of Israel when with one voice they cried for a deliverer from Egyptian bondage and in the commandments at Mount Sinai, Israel was forbidden to sell their kinsmen into slavery. But the saga began centuries earlier.

Jacob steals Esau’s birthright (Genesis 25:19-34; 27:1-41). He uses underhanded means. Jacob gets the birthright, but he flees. What use is a birthright outside the place and parameters of its fulfilment? All good options close, save one, a trap. Jacob flees to Laban, an uncle. On his way to his uncle, he stops at Bethel for the night. He sees angels of God going up and down a ladder that reaches to heaven. God is saying: “Jacob you have acted wickedly, but I am not giving up on you. I am making a way for you to return to me and to fulfill my purposes regarding you and your descendants.” Jacob becomes no more than a hired hand, exploited, and cheated in Laban’s household. Laban must have got wind of Jacob’s underhandedness and probably there is a method to his unscrupulous dealings with Jacob.

Africa is in business; over 400 years ago. An unusual business. Even if Africa gets the short end of the stick. As someone noted, business is war and conflict that takes advantage of the weakness of kinsmen. For short-sighted instant gratification Africa sells her kinsmen into slavery, stealing their birthrights. By this action Africa bargains away all good options, save the trap, “Laban.” Laban (Europe) raids the continent of its rich minerals and natural resources, commits

came to their gates. Not a shield or spear was found among forty thousand in” Africa. Judges 5:8.

Does God allow sin to be a part of the working out of his purposes? Yes. So, Africa is reminded of her Bethel where a ladder of intercession on her behalf reaches heaven and is answered so God’s purposes for her are fulfilled, in spite of.

Jacob has had enough of Laban’s underhandedness. It has been twenty years. But he is confronted with his unpalatable

history. He must face it or forever remain a hired hand in Laban’s household.

Africa has had enough of Laban’s (the West and now the East) exploitation and underhandedness. It has been 400 years and some. Africa must face its unpalatable history. Africa must address it or forever remain a hired hand in ‘Laban’s’ household.

Jacob decides to risk it all. He escapes with his family. Note that not once did we read that God appeared or spoke to Jacob while he lived with Laban until he made the decision to return. In response, God prepares an army of angels to escort him at Mahanaim. The real threat of meeting Esau rears his head like the hissing of a poisonous snake. “Jacob

looked up and there was Esau, coming with his four hundred men.”– Genesis 33:1. He calls on God for help. There is still treachery in Jacob God needs to deal with. Up until now Jacob does not think he needs forgiveness. Afterall, Mother Rebekah assured him the birthright was his from the womb. What he thinks he needs is safety from the fierce anger and murderous intent of Esau. But Jacob’s greatest need is acknowledgement of wrongdoing and forgiveness from God and his brother Esau, not safety. God answers Jacob by inviting him to a wrestling match during the night to take out his hip: the hip of treachery, of betrayal, of deception, of underhandedness, of conspiracy and fraud. This is how he will be free to appropriate his birthright. “So, Jacob called the place Peniel, saying, “It is because I saw God face to face, and yet my

life was spared” (Genesis 32:30). Jacob pleads with God after his hip has been taken out, “I will not let you go, unless you bless me.” He receives the blessing of forgiveness which reflects in his new name, Israel.

Africa, would you acknowledge the horrors of your crime at ‘Peniel’? Do you feel their pain and shame? Women denied decency, raped, and discarded; many drowned themselves instead of enslavement; many died of thirst and hunger on long journeys, and from the mean whips and chains of their African captors. Do you feel the horrors of rejection, humiliation and indignity and their repercussions on present generations? The loss of family ties, the heartaches of

ancestors who lost their relatives to this grim monster. Why are you quiet? Why do you feign amnesia? Why don’t you say something? Don’t you realize what you have done? Where is the healing balm? Did you ever hear of such a thing anywhere in the world: a race selling its own in droves to another race (save a minority who were captured)? Don’t you shudder at just the thought of it? What are you siting down for? Rise up. Go on your knees and repent for the horrific acts of the ancestors to descendants of African slavery. Repent of your own wilful forgetfulness by treating lightly the horrors of the slave trade. Wash their feet and comfort them - “Comfort you, comfort you my people, said your God; So I will lay to rest My wrath against you, and My jealousy will turn away from you. Then I will be calm and no longer angry.” (Isaiah 40:1 & Ezekiel 16:42)

Africa’s role in the Transatlantic slave trade was a publicly coordinated sin led by their kings, chiefs, courts, and business partners, and this public sin must also be coordinately acknowledged publicly and dealt with. Should it surprise us that God’s hand is in the UN declaration of International Decade for People of African Descent from 2015-2024? The ongoing protest movements against racism and racialization against people of African descent are only tremors of a major seismic shift, a shift that demands Africa takes the lead by recognising her role: confronting her ugly past and righting the wrongs of her ancestors.

‘HOW BEAUTIFUL ON THE MOUNTAINS ARE THE FEET OF THOSE WHO BRING GOOD NEWS!’

Join and Invite Others: www.facebook.com/40YearPanAfricanPrayer/

'Get rich quick' attitude among the youth eroding moral fabr...
58 minutes ago