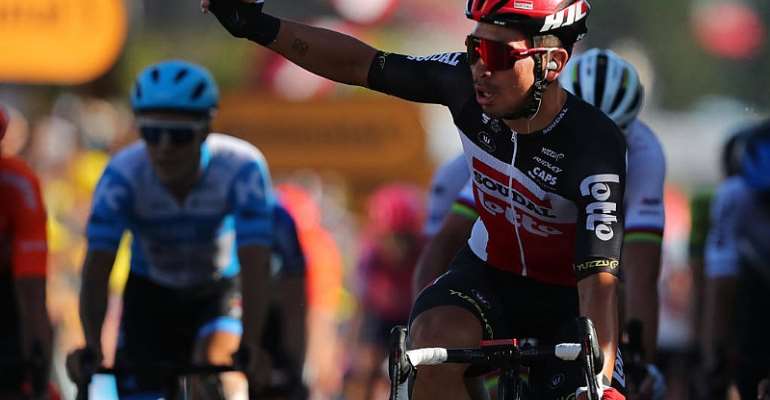 Caleb Ewan won the 11th stage of the 2020 Tour de France on Wednesday following a blistering scramble to the finish line.

The Lotto Soudal rider ended the 167.5km between Châtelaillon-Plage and Poitiers in four hours and one second.

On Tuesday, Sam Bennett edged him out to take the 10th stage but in a frantic burst, the 26-year-old Australian got his revenge when he outsprinted Bennett, Wout van Aert and Peter Sagan to claim the course.

"It was very very hectic," said Ewan. "I just had to keep calm and wait for the right gap to open and it did in the end, quite late but I just had a real desire to win after yesterday.

"I was quite disappointed with my sprint on Tuesday and I was happy to repay my teammates with a win today."

Sagan, who finished second, was demoted to last place for touching van Aert in the dash to the line.

As a result, Bennett moved up to second and Van Aert was third. The 25-year-old Belgian kept his place despite videos showing him making an offensive hand gesture to Sagan.

The drama came at the end of the stage that headed eastwards away from the Atlantic coastline of the previous day.

Six riders set off in pursuit of the French veteran but they were quickly sucked back into the peloton.

Ladagnous still held the lead at the stage's midway point near the village of Saint-Gelais but his 120km moment in the sun came to an end with 40 kilometres remaining as the teams started to prepare their men for the final assault.

Primoz Roglic retained overall lead of the race. The Jumbo-Visma rider boasts a time of 46 hours, 15 minutes and 24 seconds after 1,870.5km of the race which culminates on 20 September along the Champs Elysées in Paris.

Defending champion Egan Bernal is 21 seconds behind Roglic and two Frenchmen, Guillame Martin and Romain Bardet, are respectively 28 and 30 seconds off the pacesetter.

Gov’t in the process of buying bigger presidential jet – Eug...
39 minutes ago