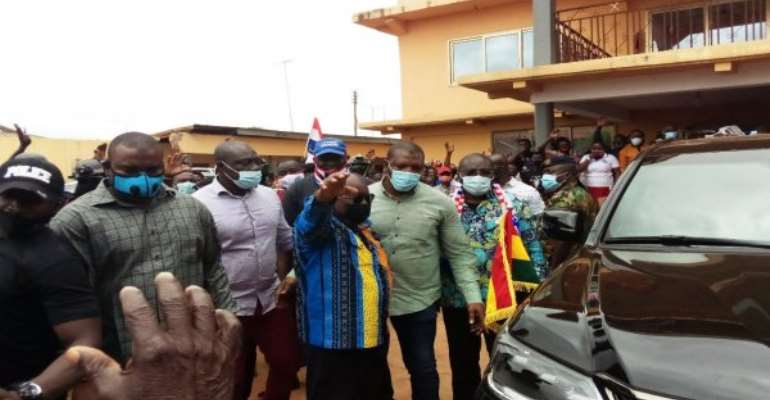 Oseadeeyo Akumfi Ameyaw IV, the Paramount Chief of Techiman traditional area has described President Akufo-Addo's led government as a development-oriented institution and commended it for its landmark initiatives.

Oseadeeyo Ameyaw said since the assumption of office of the Akufo-Addo's government, many innovative development initiatives and programmes such as the Planting for Food and Jobs, Free Senior High School, Rearing for Food and Jobs, Planting for Export and Rural Development, One District One Factory among other had been implemented to provide jobs and improve the livelihoods of the people.

The 'Techimanhene' (Paramount Chief of Techiman) gave the commendation during a courtesy call on him by president Akufo-Addo on Wednesday at Techiman in the Bono East Region.

President Akufo-Addo called on him as part of the former's two-day working visit to the region that commenced at Kajaji in the Sene East District.

Oseadeeyo Ameyaw IV said the Techiman Traditional Council had provided a vast tract of land for the construction of a Regional Hospital and also a structure to House the Regional House of Chiefs and appealed to President Akufo-Addo to consider the siting of the two institutions in the 'city' of Techiman.

President Akufo-Addo assured his government would remain committed to ensuring the speedy socio-economic development of the region and implored the electorate to vote for him and the parliamentary candidates of the New Patriotic Party in the December 7 presidential and parliamentary elections to enable his government to fulfil that commitment.