You're Not Appendages Of Politicians — NMC Chairman To Journalists 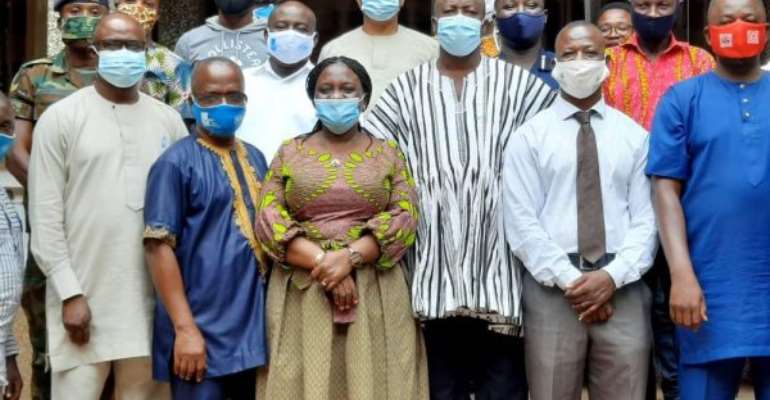 Mr Yaw Boadu Ayeboafoh, Chairman of the National Media Commission (NMC) has encouraged Journalists to be critical, and analyse information before them to assert their authority in the reports they present.

He further urged journalists to be strong and pursue credible, firm and trusted professional endeavours in their persuit for public interest.

He said "Politicians will always do things to favour their interest, but we (journalists) must know that we are not appendages of politicians."

Mr Ayeboafoh made the point while presentating on the Ghana Journalists Association (GJA) and NMC Guidelines on Election Coverage at a forum for journalists in Tamale as part of the GJA and United States Embassy Media Convention 2020 Project.

The day's event, supported by the USA Embassy in Ghana was attended by journalists, representatives of the security agencies and political parties drawn from the Northern, North East, Oti and Upper East Regions, and had as its theme as: "The 2020 Election: Role of the Media in Promoting Civility and Discernment in the Political Discourse".

It was to educate participants on what was expected of them to promote amongst others issue-based campaign to ensure credible elections this year.

He emphasised that journalists must serve the interest of members of the public, and desist from being dictated to by political interests.

The NMC Chairman advised journalists not to report anything because it was said by somebody without analysing such statements, adding that they should report what would inure to the benefit of society.

Madam Stephanie Sullivan, United States Ambassador to Ghana, in a recorded video message, said as Ghana and the United States approached their elections this year, "Both of our nations must be vigilant in maintaining a strong corps of journalists, one that is respected, protected and held accountable for the quality and truthfulness of its reporting".

Ambassador Sullivan added that "As we approach the upcoming elections, we must also be mindful of the media's influential power, especially with the advent and introduction of digital platforms including social media".

She, therefore, cautioned against publication of false information, especially on digital and social media platforms and indicated that it could sow confusion and amplify destructive partisanship, which could not be in the interest of national peace.

Mrs Linda Asante Agyei, Vice President of the GJA reminded journalists of their crucial role in ensuring credible elections and urged them to live up to expectation.

Mr Lucas Yiryel, Acting Northern Regional Director of the Electoral Commission, appealed to media houses to help educate the public on the electoral processes such as how to vote, fold the ballot paper amongst others to ensure successful elections.

Alhaji Abdul Razak Saani, Northern Regional Director of the National Commission for Civic Education, who chaired the event, urged journalists to represent the interest of the people and help them to be discerning and work for the growth of the country's democracy.

Ghana gets 1.5m AstraZeneca vaccine doses from Germany
51 minutes ago