By Nic Cheeseman - The Conversation 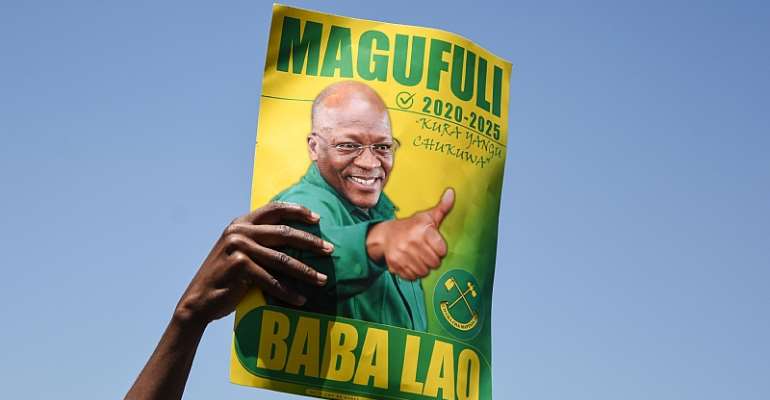 A campaign poster of John Magufuli of the ruling Chama Cha Mapinduzi party who is seeking re-election as president in October. - Source: Ericky Boniphace/AFP via Getty Images)

Free and fair elections face a new kind of threat. In addition to scheming leaders and compromised electoral commissions, there is now the impact of the coronavirus pandemic.

In response, a new report published by the British Academy sets out how elections can be held safely and democratically amid COVID-19. Edited by renowned political scientist Sarah Birch, it covers a range of topics, including how to establish health protocols and manage the risk of election violence. The report sets out the options for international election observers.

This is critically important because despite the health crisis, there will be no letup in controversial elections – starting with Tanzania in October and the United States in November. International observation will not insulate these polls from malpractice, but it will make it less likely and allow it to be exposed.

Yet the kind of observation carried out by the Carter Centre , European Union , Organisation of American States , and other international organisations requires flying large numbers of people between countries. It is therefore one of the election activities threatened by the pandemic.

The report looks at how the observation industry can best adapt. It concludes that, instead of simply introducing short-term COVID-19 guidelines and protocols to get through the crisis, observers should

look for new ways to harness technology and build stronger partnerships between domestic and international groups.

By doing this they will be able to both respond to the COVID-19 challenge and more effectively counter new forms of electoral manipulation.

International observation has come in for criticism in recent years – sometimes unfairly – for failing to call out electoral manipulation that was later condemned by the courts. But it nonetheless remains a vital weapon in the fight against election rigging. The verdicts of foreign observers carry more weight than those of their domestic counterparts, and are more likely to prompt international intervention.

Simply not observing elections would be the easiest way to manage health risks. But it would significantly increase a variety of important political risks. In Burundi, for example, a late requirement that international monitors would be quarantined made observation impossible. In its absence, there was no significant attempt by ruling party leaders to stop the intimidation of the opposition .

Even when observers do not condemn every electoral abuse, they can highlight and hence dissuade such explicit human rights violations.

So what options do observers have to respond to COVID-19? The report finds that they have a menu of three options to choose from: they can carry on regardless, observe through expats or work virtually and through partnerships.

Carry on as normal - carefully

The most obvious strategy is simply to observe “traditionally” while adopting strict social distancing protocols. This would involve dispatching teams of foreign nationals – usually between 15 and 140 people – earlier than usual in case they must quarantine. It would also mean holding fewer socially distanced meetings with key groups and individuals in the capital, and taking greater care when dispersing to polling stations.

Although this option represents the path of least resistance, it is problematic on health grounds and could mean no international observation in countries where the disease is spiking. It also represents a missed opportunity.

By responding effectively to the pandemic, when constraints on public campaigning mean that there will be an even greater focus on digital politics, observers can also build a more effective model for the post-pandemic world.

Read more: As concerns mount over integrity of US elections, so does support for international poll monitors

If observers are to evolve new ways of working to deal with changing electoral realities it is essential that they do not simply look for stop-gap responses to COVID-19 such as working through foreign nationals already resident in the country.

This may at first appear to be a tempting option as it would enable observation groups to tap into a pool of people who would not need to travel, and would have greater knowledge of the context.

But it would also generate new problems. Most obviously, people who have spent a long time in a country may have developed political attachments that mean they are not seen as being independent. This undermines the fundamental point of international observation, which is to build teams around people who have no personal interest in the elections, and so are seen to be neutral.

It would also encourage observers to continue with business as usual just when they should be innovating.

Observe virtually and through partnership

Adopting three new ways of working could make observation more effective, both now and in the future:

By allowing domestic and international groups to focus on areas in which they have particular strengths, this option would be more efficient and effective.

Looking to the future

Of course, observing virtually and through partnership would generate new logistical challenges and require international observers to recruit new kinds of skills and experience. Observers would also need to be careful not to distort the priorities of domestic groups by adopting a rigid funding regime. But while global intergovernmental organisations don't tend to do this at present, NGOs such as the Carter Centre and the National Democratic Institute have been using elements of this strategy for many years. There is no reason these programmes can't be deepened and extended.

This approach would also yield other benefits, such as boosting suitability. One of the aims of the international observation should surely be to make itself redundant by helping to build the capacity and authority of domestic observers. This may be a very long-term goal, but it is an important one. In addition to giving ownership of the process to the citizens concerned, it would also help to show that criticisms of poor quality electoral processes are not the result of foreign “meddling” .

Nic Cheeseman does not work for, consult, own shares in or receive funding from any company or organisation that would benefit from this article, and has disclosed no relevant affiliations beyond their academic appointment.

By Nic Cheeseman, Professor of Democracy, University of Birmingham

More Article
Modern Ghana Links
THE 8TH PARLIAMENT: The Prophecy, The Twists
Why IP matters for Covid-19
Pasha 94: Talking about masculinity with South African artist Nakhane
How one South African employer helped its staff get healthier and why it's worth doing
The role of bias in how women are treated during childbirth: a Kenyan case study
Many old people in Ghana need daily care. How the government can help
How Personal Brands Can Gain Exposure to New Audiences Beyond Social Media
JohnPauls Eyiram: Why animals should not be caged?
Rawlings' Legacy: Economic Reforms and Impact on ordinary Ghanaian
Election Reports Quotes Dossiers
TOP STORIES