Ghana sits on a major fuel discovery: The biodiesel oil is here. 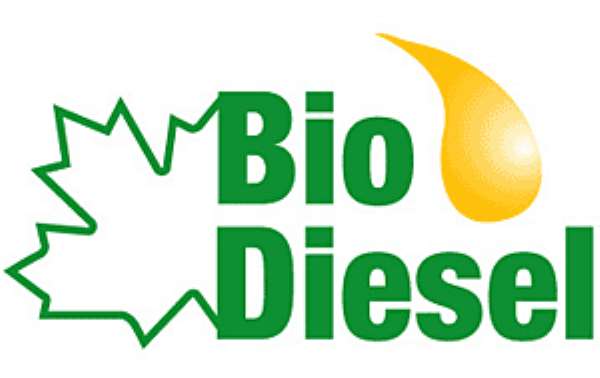 Hooray ! , Uncork the champagne and inflate the balloons –the party is on ! Ghana just found 'green oil'. field, which can produce oil within three years . Producing oil from palm trees is a prayer answered. But, let's see if the government would take advantage of that. .

Ghana could literally produce diesel oil from palm oil in few years, but do not expect it to become a member of the OPEC yet. With the concern about climate changes , high petroleum price and the Akosombo dam's unstable water level, going 'green' is not a choice ,but an economic necessity .We surely can use more oil from our own farms to power our towns and villages.

The oil extraction from palm kernels is a by-product and can be found virtually in every household item in Ghana and around the world. The palm oil goes into everything we use—from biscuits to shampoo, from skin cream to teeth paste and from brake fluid to soap . Now there is something new to add to the list: it will soon run your vehicles and generators—this is a gospel according to the environmentalists and the world's energy experts . The technology of biodiesel from crops is here to stay. So we better get on board.

Traditionally, soybeans and corn dominated the bio-diesel business in America. But, lately Malaysia and Indonesia—which produce most of the world's palm oil—are jumping on the bandwagon. Philippines and Thailand are also investing in big plantations. .Even Singapore, which has no land for palm oil plantation is ready to refine its neighbors' palm oil .With fossil-fuel(petroleum) price hovering around $ 60.oo a barrel , the quest for a renewable and cheaper alternative oil has intensified the bio-diesel technology.

The bio-diesel technology is not new. It has been around since the beginning of the 2oth century. but, Its importance just started to get the world's attention when the environmentalists started to hold the oil companies responsible for the depletion of the environment. The oil price also plays a major role in highlighting the bio diesel's importance and existence. So, it's feasible for Ghana to develop this technology because it has been done by other countries which do not even produce none of its main ingredient.

Now ,I can hear you mumbling to your self: ”but, it's not feasible to produce bio-diesel in Ghana and we don't have this and that”, But, listen to this; When Rudolf Diesel( the German inventor) demonstrated his new diesel engine at the Paris World's Fair, in 1900, he ran it on peanut oil. Yes, Peanut oil. Brazil also has been using bio-fuel from its sugarcane, as a source of fuel to run its transportation system for years. So to those of you who have a little doubt about this technology, I hope you can sleep well to night and have sweet dreams.

This bio-diesel thing is gaining momentum around the world in places where its raw material is not easily available. When the heavy weights of companies are getting involved then Ghana should pay attention. In America, companies like: Archer Daniels Midland company , Cargill, Chevron and BP, are pumping millions of dollars into the green oil production and processing. So it would not be long before we start filling our vehicles with bio-diesel products from the same oil companies, which are controlling the oil fields around the world.

The main incentives that make many companies get into bio-diesel production are:
its environmental friendliness , because it burns cleaner and releases fewer pollutants, like carbon monoxide and particulate matter. It contains low –sulfur and the Price is relatively cheaper than a conventional diesel oil.

By the way, I'm not a scientist or a renewable energy expert. However, I just happened to look for avenues which can make us lift ourselves up. That is what we need to do as leaders of society, and not always going around to look for what others can do for us.

With all that , I hope and pray that Ghana would double its effort and embark on this 'golden opportunity', so as to rescue our economy from its doldrums .Not only that, the producing of the bio-diesel oil would free up the millions of dollars we spend on oil import, but we can get a reliable and dependable source of oil to run our power stations. That could eliminate power shortages we've been experiencing. The uninterrupted power supply means businesses can blossom .

The employment potential of this technology is enormous, given the labor involves. From the seeding to plantation and extraction And, from the factory to the refinery to the finish products our unemployment problems could be solved in no time.

There are other benefits : the oil palm tress could be a major source of raw alcohol, which could be exported or refined in Ghana to produce all kinds of alcoholic beverages .The residue from the palm oil is also a source of food for livestock .

In fact, there is not enough room here for me to list all the advantages of the palm oil industry. But, I doubt if our policy makers and the visionless leadership would ever touch this with a ten – foot pole. And, before the day is over, they are going to come up with all the reasons why we can't and shouldn't go into such a lucrative and environmental friendly business. That would be fine with me, for we see more problems than solutions in our part of the world.

“But, oil palms take several years to start bearing fruit. It will make cooking oil more expensive for the poor, and we have to be very careful not to turn our arable land into oil palm plantations; thereby reducing the acreage of other plantation crops such as ,cocoa ,rubber and edible food crops”, Is that your thinking?. Oh, really?. The Saudi Arabia and the other Arab countries which produce zillion of barrels of oil have no arable land to plant anything. All they have is a desert. And, when was the last time you saw a starving Saudis on TV? With the money from the oil they can afford a lot of things they can not produce, locally.

And, how come Dubai has the world's biggest and greener golf course ? It has also positioned itself to be the world's recreation center. .I can go on and on ,but I'm sure you get my point. As a nation, we need to have a 'dream'. A dream ,of which all effort, energy, resources and power are placed. This should be backed by a burning obsession and faith. When we have that, maybe(just maybe),we could walk unto the Economic- Promised Land of freedom and its twin sister power .

The power to do things our way ,power to educate our citizenry, power to retain out professionals, power to enjoy our fertile land .Power to play our meaningful role in the global village. Power to bring the sons and daughters home from their self-impose economic exile. Is there any man or woman in the land who wants to take this challenge? Where are the visionaries and action-oriented leadership, when we are starving for one? My crossed fingers are still in placed.

Or perhaps I'm just engaged in a wishful thinking here. What do you think? On that note, let me pour myself a glass of some orange juice, while I'm waiting .However, I hope I'm not waiting in vain. I'm packing.

* The writer is a social commentator and a founder of Adu-Gyamfi Youth Empowerment foundation, which gives scholarship and apprenticeship programs to the youth of Asuom