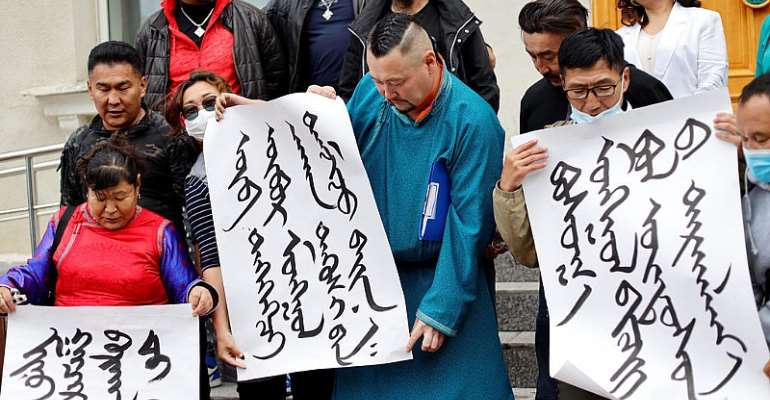 Earlier this month, Mongolians in the Chinese Autonomous Region of Inner Mongolia demonstrated against government plans to strengthen Chinese language education at the expense of their native Mongolian. Tibetan and Uyghur areas have also complained of a shift in language education. Minorities fear being victims of a concerted plan to wipe out local languages.

Hundreds of thousands of students in Inner Mongolia, home to 4,2 million ethnic Mongolians, are reported to have boycotted classes starting 1 September.

Unlike China's other main minority areas, Tibet and Xinjiang, Inner Mongolia is relatively stable, in spite of occasional flare-ups of discontent directed at the regime in Beijing.

The anger was sparked by a document issued by the Inner Mongolian Education Bureau dated 17 August 2020, saying that three main courses in primary and middle school - general language, history and "Morals and Law" - will now be taught in Mandarin, rather than in the Mongolian language.

The document has been published by the New York-based Southern Mongolia Human Rights Information Center (SMHRIC).

A notice on 7 September from the Inner Mongolia Education authority to students added that schools in the region will “gradually implement” education in Mandarin over a three-year period from 2020. “This is a major political task that we must accomplish well in the present and future generations,” the notice adds.

“Learning several languages definitely has good points,” according to Uzhtok Tauhu, the head of the Inner Mongolian Teachers' College's Nationalities Studies Department, quoted by a local website for CCP veterans. “Students of minority groups not only are proficient in their mother tongue, but they study Mandarin at school and will soon learn English and other languages as well, so they will follow the general trend of globalisation,” he says.

But for Mongolian parents and their school-going children, the message is clear: for them,bookmarks folder “Projects” the move signifies another step by the Chinese government to undermine their traditional culture. Disquiet has led to protest marches, region-wide school boycotts, an avalanche of YouTube-protest-videos, and petitions to the local and central government to stop the new policy.

Excessive force
Chinese police reacted immediately, and went after the demonstrators. Police in the city of Tongliao put pictures of some 129 people on an online bulletin board, promising a 1,000 Yuan (124 euro) reward for information that would lead to the arrest of any of them.

“Beijing has always acted with excessive force to put down unrest,” says Enghebatu Togochog, Director of the Southern Mongolian Human Rights Information Center, contacted by RFI. “The crackdown has already started. Hundreds of people have been arrested, detained or put under house arrest,” he says. A journalist working for the Los Angeles Times who managed to go to Inner Mongolia's capital Hohhot, was briefly detained and told to leave the region.

“Political speculation”
Meanwhile, Beijing has rejected all criticism from the foreign press and human rights organisations. The state-controlled Global Times accuses “some western media” of having “hyped” the new regulation, “claiming that Inner Mongolia is replacing Mongolian by Putunghua (standard Mandarin.)”

Chinese Foreign Ministry spokesperson Hua Chunying said during a press conference on 3 September, that the reports are “political speculation with ulterior motives,” but adds that “the common language of a country is a symbol of its sovereignty, and it is every citizen's right and responsibility to learn and use it.”

But the change in Beijing's Inner Mongolia's language policy seems to be part of a larger pattern.

Beijing then aggressively moved to alter language education in minority areas like Xinjiang and Tibet.

In a report entitled “China's 'Bilingual Education' policy in Tibet,” New York-based Human Rights Watch notes in increasing trend of “gradual replacement of Tibetan by Chinese as the medium of instruction in primary schools throughout the region.”

In neighbouring Xinjiang, home to the Muslim Uyghurs, a similar policy was implemented. In Xinjiang forced integration policies seem to have been moved to another level with forced detention and “re-education” programs with a focus on Chinese language.

“The argument here is separatism,” says Michael Dillon, an independent scholar and Xinjiang specialist. “It's a term the Chinese think is reinforced by traditional Uyghur language and culture and the religious elements of that.

“And if you can get away from that, make them more Chinese, then there won't be any demands for a separate administration in Xinjiang, which some Uyghurs certainly still want.”

Xinjiang education policies may go even further than the ones introduced in Inner-Mongolia. In 2017, Radio Free Asia (RFA) reported on a document published by the Education Department of Hotan Prefecture in Xinjiang Autonomous Region, a “five point directive outlawing the use of Uyghur in language schools in favour of Mandarin Chinese.”

Additionally, RFA reported, “the order bans the use of Uyghur language in collective activities, public activities and management work of the education system.”

End of diversity?
The development spells a dark future for the diversity of China's minorities. Officially, Beijing registers 55 “national minorities” who, together with the “Han-Chinese” make up the population of China.

Among the largest groups are the Zhuang (about 10 million,) Hui (10 million), Uyghur (10 million), Tibetan (8 million) and Mongol (6 million); these five groups are concentrated in so-called “autonomous regions” that have the status of provinces, but are nominally administered by a governor who is a member of the minority.

However, the real power is always in the hands of the CCP Party Secretary who is, in almost all cases, a Han-Chinese, and who answers directly to the Central Committee in Beijing.

United Front Department
Traditionally, Beijing's relations with its minorities were in the hands of the National Ethnic Affairs Commission (NEAC,) which is headed by a representative of one of the minorities, currently by a man called Bater, an ethnic Mongol.

But in 2018, Beijing announced that the United Front Department (UFD) would take management of the NEAC, and its work with the national minorities. The UFD is a powerful organ aimed at forcefully uniting different religions and political entities under the umbrella of the Communist Party.

Article 13 of a watershed policy paper with the innocent title “Deepening the Reform of Party and State Organs,” published online by the central government on 21 March 2018, says in blunt terms that the Party's United Front Department is now directly responsible for minority affairs: this organ now directly seals the fate of China's 55 minorities.

“The UFD is certainly meant in part as an instrument of control,” says Michael Dillon. “Now under Xi Jinping, we're going back to the more authoritarian, nationalist approach of Chinese above everything else.”