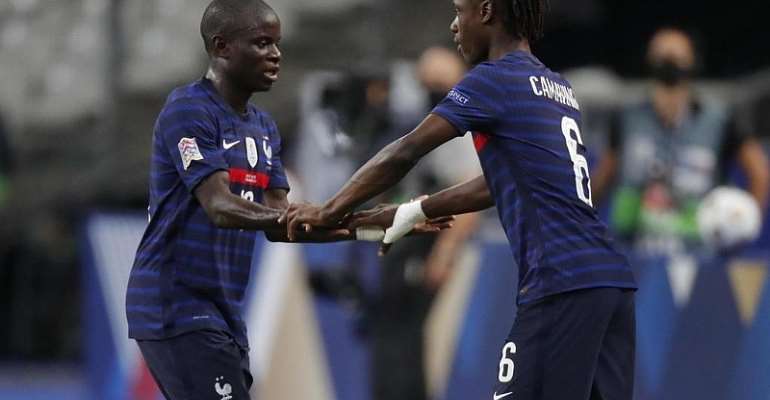 French football's teen sensation Eduardo Camavinga returned to Ligue 1 concerns with Rennes on Wednesday hours after becoming the youngest player to represent France for more than a century.

When the midfielder replaced N'Golo Kante on Tuesday night during the second-half of the Nations League tie against Croatia, he took the accolade of third youngest man to turn out for the senior side.

Camavinga, at 17 years and nine months, is eclipsed only by Maurice Gastiger who was 17 years and 4 months when he first played for France in 1914 and Julien Verbrugghe, who was two months shy of his 17th birthday when he made his debut in 1906.

"Firstly I feel joy and pride for my family," said Camavinga, who was born in Angola to Congolese parents who moved to France when their son was two. "I have often played against older players and I think that has allowed me to have a certain amount of maturity," he added.

In his 27-minute cameo, the Rennes prodigy, who has been linked with Real Madrid, was tidy and industrious alongside Steven Nzonzi and Moussa Sissoko and appeared to offer more attacking menace than Kanté.

"He's in his element," said France coach Didier Deschamps after the match. "And he's got no problems on the physical side of things. He has a way of carrying the ball ... it seems so simple and so easy for him. He's been the youngest person to play for France for a long time and he has the potential to play again for the team."

Stakes
Camavinga's introduction came in the 63rd minute soon after the Croatian substitute Josip Brekalo had made it 2- 2.

Parity did not last long for the visitors at a fanless Stade de France. Dayot Upamecano's powerful header from Antoine Griezmann's corner restored the hosts' advantage and Olivier Giroud confidently swept home a 77th minute penalty to give France a two goal cushion and ultimately maximum points after two games in Group 3 of League A. Portugal lead the way on goal difference following their 2-0 win in Sweden.

Midway through the first half, a comfortable victory would have been hard to foresee. Croatia dominated the opening exchanges as France appeared to struggle with the seven changes from Saturday's win in Solna against Sweden.

Dejan Lovren opened the scoring after 15 minutes but on the brink of half-time, France struck twice.

As Croatia recovered from the setback, Sissoko muscled possession of the ball and released Ben Yedder down the right, his pass into the centre found its way to the left where Martial connected. His shot hit the post but rebounded onto the Croatia goalkeeper Dominik Livakovic and into the net.

"To go in at half-time 2-1 was a bit flattering," said Deschamps. "But that's football and you have to go through moments like that. We were off the pace for the first 30 minutes. We weren't winning challenges and seemed timid but then I thought the Croatians ran out of steam."