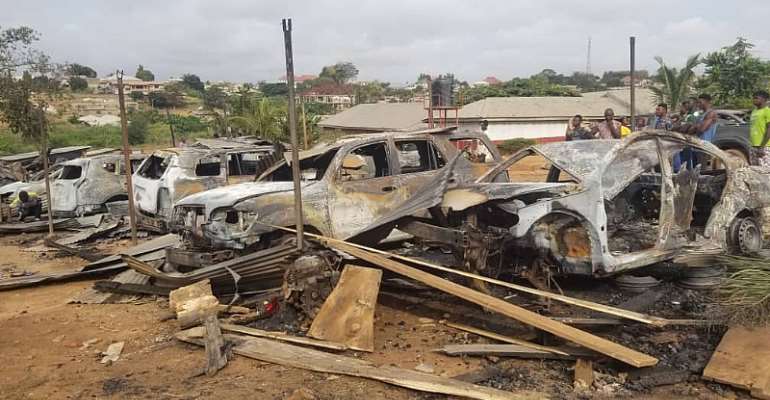 Soe 11 expensive cars have been burnt to ashes at a straightening shop at Kumasi in the Ashanti region.

The fire incident occurred on Tuesday evening after a fire from a nearby mechanic shop extended to the shop where the cars were being worked on.

The vehicles destroyed by the fire include a Range Rover, two Geep vehicles, 3 Toyota Highlander, Toyota Tundra among other brands.

Owner of the mechanic shop Seidu Abdulai told Ultimate FM’s Isaac Bediako the fire could have been stopped if personnel of the Ghana Fire Service at KMA and Komfo Anokye had responded on time.

He said the cars burnt in the shop including his working equipment will cost about GHC100,000.

He called government to come to his aid in order to rebuild the shop.

Meanwhile, a businessman Adu Kofi Godfred who managed to move two out of his three vehicles in the mechanic shop said he will not demand the car from the mechanic.