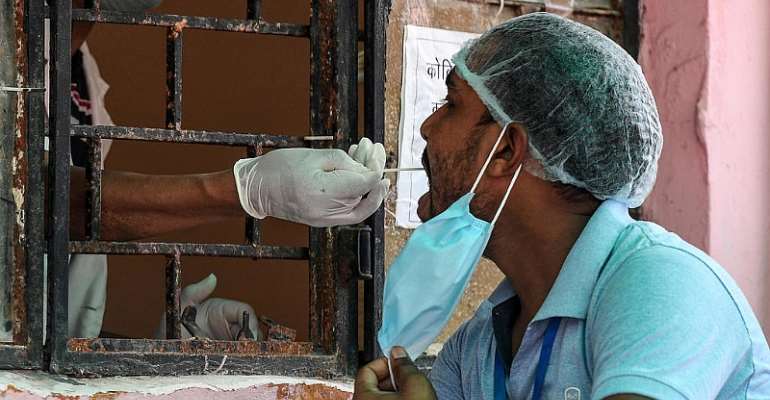 India's national capital Delhi invited city bars to re-start business from today even as the country posted another single-day wave of almost 90,000 new coronavirus cases with more than 1,000 daily deaths for the eighth straight day on Wednesday.

It took to 4.3 million India's Covid-19 tally with 73,890 deaths, narrowing the dreaded numbers gap with the United States.

Delhi has so far reported 197,135 infections but officials said life must go on in the city of 20 million.

“West Bengal state allowed public bars to reopen on September 1 and so far there have been no problem as they are following all health rules,” a city official said.

Delhi clubs, hotels and restaurants must also do the same during happy hours or face action, he warned.

The hugely-popular National Press Club in Delhi said only two members can share one table and that too for an hour.

Restaurateur Priyank Sukhija vowed to follow the rules at his city watering holes, popular among expatriates and well-heeled locals out on a  bibulous evening.

“Live performances will also not happen for a while since people usually tend to stand up and dance,” Sukhija told The Hindustan Times.

Another upscale restaurant chain said it had already started serving alcohol customers in cities such as Chandigarh and Gurugram.

“The numbers have been good, but nothing compared to pre-Covid times,” said Mayank Bhatt, the chain's brand head.

“15,000 cases of liquor are locked up in inventory with bars and restaurants, and liquidation of that will be a great relief to the hospitality sector,” Confederation chief Vinod Giri said.

But the public's hesitance to return to old habits underscore predictions that takeaway delivery groups could eat up half the revenue of dine-in restaurants and clubs in financial year ending March 2021, ratings agencies say.

On Wednesday, Delhi city also expanded the services of its suburban trains as more and more offices re-opened, prodding home-bound workers to report back on duty.

The Delhi Metro Rail Corp, which daily carried 2.2 million commuters, started limited operations after a gap of 171 days on Monday.

Elaborate measures were also being put in place to help parliamentarians keep their distance in the Delhi-based national legislature which will resume business next Monday.

The federal government hopes to turn at least 11 key drafts into law during the 18-day session, which will bypass traditions to avoid infections from spreading.

“Health Ministry issues standard operation procedures for partial reopening of schools for students of 9th-12th classes on a voluntary basis, for taking guidance from their teachers,” it announced on Twitter. Experts such as Shahid Jameel urged the authorities to practice extreme caution.

“It is a matter of grave concern that the outbreak is expanding into areas where we can't provide the medical help that the people need,” the virologist told television.